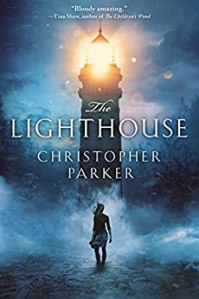 When I read this book, I didn’t realize it was the first by this author. I was drawn to it because of the cover and the fact that I enjoy reading about and have also written a novel featuring a lighthouse. I was more than pleasantly surprised by this story.

After a young woman’s mother dies, her father, a detective, takes her to a small town called Seabrook where he’s been assigned a missing person’s case. His hope is to give her a change of scene and help her heal. What follows is a series of odd events that may remind some readers of a Twilight Zone episode.

Without giving too much away, I will say that I thoroughly enjoyed this book. I could hardly stop reading. There were many surprises, romance, and an interesting ending. And, yes, the lighthouse plays a significant role. If you enjoy paranormal novels with touching characters, I highly recommend this book.

If you’re a lighthouse or mystery fan, you might also enjoy my psychological thriller, Sea Scope (https://books2read.com/u/bQyBgZ), about a murder at a lighthouse. The eBook will shortly be available on several platforms besides Amazon.

Besides an interesting title, A Flamingo Under the Carousel by William John Rostron is also an interesting book. What makes it unique is the author’s preface to each section and each story in this collection. By providing details on how each published work was inspired and the stories behind the stories, the reader is given a glimpse into the author’s mind and heart.

The book starts with a prologue that explains the title and then includes seven sections and an epilogue. Within the sections are multi-genre stories and essays. Some are new but most have appeared in print elsewhere. Some also feature characters from Rostron’s trilogy (that will soon include a fourth book), Band in the Wind, Sound of Redemption, and Brotherhood of Forever.

There’s something for everyone here along with a list of where each story was previously published. I enjoyed this book and believe it will appeal to a wide audience.