Charlotte Stuart – WHY ME? CHIMERAS, CONUNDRUMS AND DEAD GOLDFISH

The Controversy Over Chimera Research

In Greek mythology the Chimera was a creature with the physical traits of several animals – usually a lion, a goat and a dragon. Today, chimera research involves inserting the genetic material of a human into an animal. Not to produce a monster, but to advance medicine and improve or save lives.

The inspiration for the serious theme of my otherwise lighthearted mystery came from an article I read on one form of chimera research that is taking place in medical research centers around the world. These scientists are implanting human genes into animals such a pigs and sheep to grow organs that can in turn be harvested for transplant. Sadly, it is estimated that 20 people die each day in the United States due to a lack of donor organs. Scientists involved in this research hope to meet the growing need for organs and, at the same time, stop illegal organ trafficking.

It should come as no surprise that many bioethicists are concerned about the far-reaching implications of chimera research. They fear we may somehow cross a line by creating interspecies chimeric animals with human cells. For example, there were protests about experiments done by a Chinese researcher who implanted human genes into the brains of rhesus monkeys to improve their cognitive function. For many, me included, that conjured up visions of the Planet of the Apes movies in which intelligent primates threatened the existence of humans. It definitely makes you worry about what happens if we humanize animals. What kind of lives can they anticipate? Can we all live in harmony? And, at what point do they attain rights similar to those of humans?

As I point out in the forward to my book, the international community is divided on what types of chimera research should be legal. From my limited knowledge of how biomedical research is conducted, it seems like it should be possible to provide safety guidelines while allowing potentially life-saving research to take place. Yet, even with good controls in place, there is always the possibility that while growing a much-needed organ, a few cells could find their way to the animal’s brain. And even if some countries impose regulations on research, enforcement on a global scale may be problematic.

Another issue that many are concerned with is the treatment of animals used in these experiments. I don’t want animals to suffer. But I’m torn between not wanting to put animals through unnecessary pain and the desire to save human lives. Obviously it would be ideal if scientists could come up with solutions without using animals as test subjects. But I also don’t have the expertise to say whether this is possible or not. And the people I know in the science field are doing their best to help people; they take no satisfaction in hurting any living creature. At the same time, I believe it is a good thing that protesters keep ethical issues in front of governments and scientists. Whatever decisions are made, there needs to be a thorough consideration of potential consequences.

When I pitched my book I referred to “pigs that play chess, sheep that talk and chimpanzees with 120 IQs.” Some thought I had made this research issue up. Unfortunately, trafficking in illegal organs, protests that sometimes turn violent, and the possibility that some scientist will create a genetically altered species are all very real. Although I admit that one goal was to bring the issue of chimera research to the attention of readers, I primarily just wanted to tell a good story. Hopefully, I succeeded in doing that. And hopefully there will be a happy ending in real life as there almost always is in a cozy mystery.

Why Me?: Chimeras, Conundrums, and Dead Goldfish
by Charlotte Stuart

About Why Me?:
Chimeras, Conundrums, and Dead Goldfish 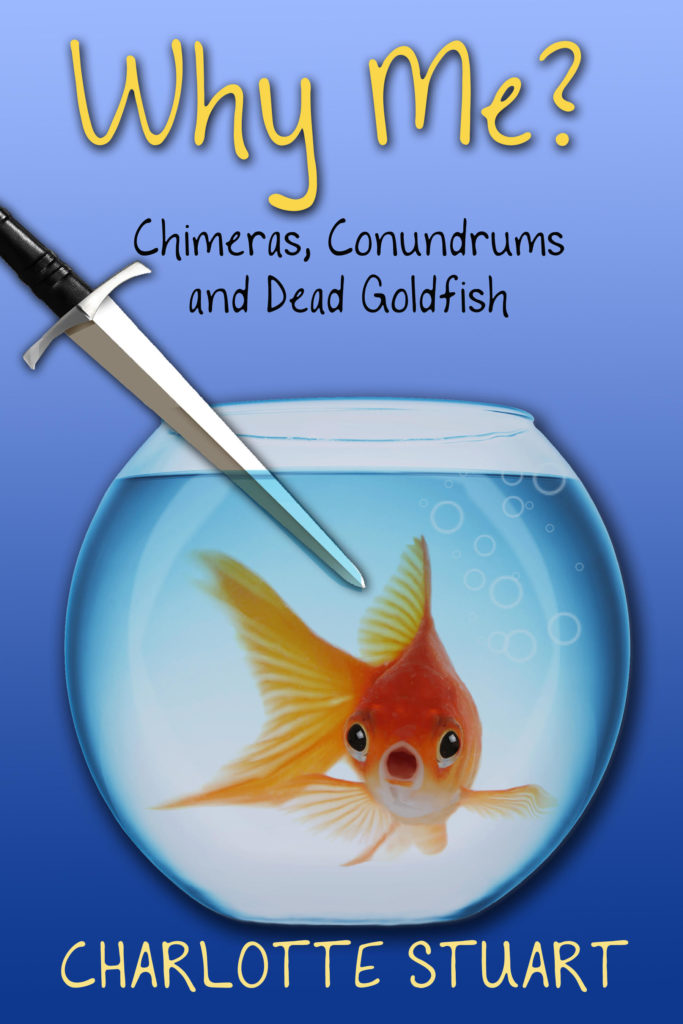 Why Me?: Chimeras, Conundrums, and Dead Goldfish

In ancient Greece, the chimera was a bad omen. In WHY ME?, it’s a motive for murder. Bryn Baczek, a Seattle consultant, is vacationing in Scotland, hiking alone in a downpour, surrounded by midges, when she sees a body at the bottom of a ravine. Before she can return to the scene with the mountain rescue team, the body disappears. She learns that he was a scientist and that his laptop containing his cutting-edge research has disappeared. Rumors that Bryn has the laptop make her a target.

In a world filled with uncertainty and too little chocolate, Charlotte Stuart, PhD, has taught college courses in communication, gone commercial fishing in Alaska, and was the VP of HR and Training for a large credit union. Her current passion is for writing lighthearted mysteries with a pinch of adventure and a dollop of humor. She is the VP for the Puget Sound Sisters in Crime. When she isn’t writing, she enjoys watching herons, eagles, seals and other sea life from her Vashon Island home office.

April 1 – I’m All About Books – SPOTLIGHT

2 thoughts on “Guest Post and Blog Tour for Why Me?: Chimeras, Conundrums, and Dead Goldfish by Charlotte Stuart”