This Magick Marmot (An Abracadabra Mystery)
by Sharon Pape

About This Magick Marmot 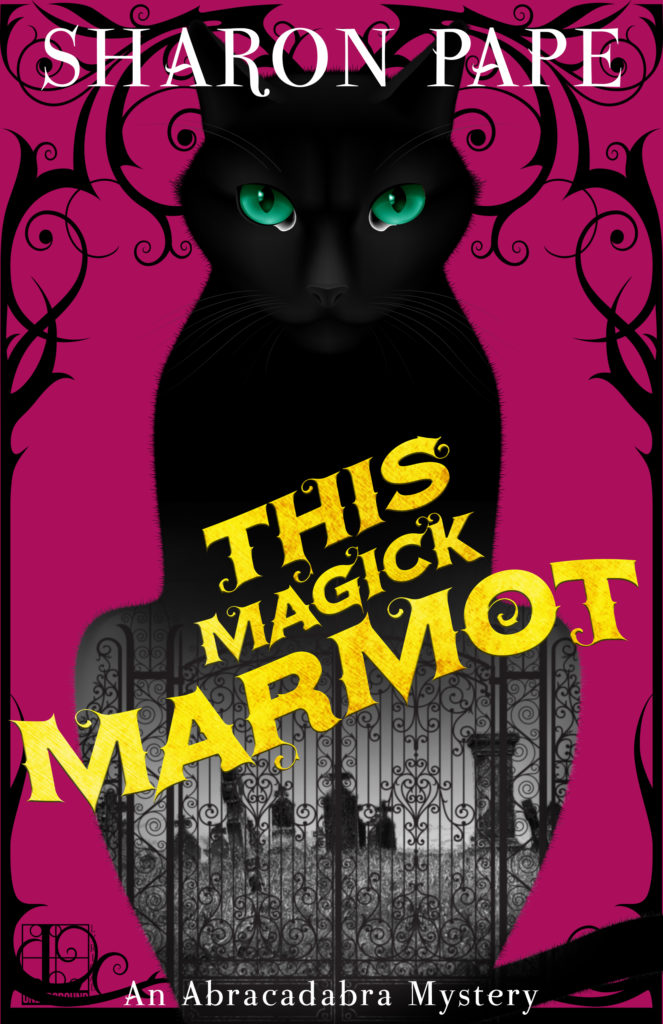 This Magick Marmot (An Abracadabra Mystery)

Kailyn Wilde, owner of the Abracadabra potion shop, feels some dread anticipating her ten-year high school reunion at the new hotel in New Camel—but it turns out even worse than she feared. Running into her very first boyfriend is pleasant enough. Chatting with Ashley—who still can’t let go of a tragedy that happened on prom night—is a bit more uncomfortable. But the worst part comes when one of Kailyn’s oldest friends is found dead in the ladies’ room.

Soon this upstate New York town is in an uproar. And with some help from time-traveling wizard Merlin—who has adopted an unusual and alluring creature as his familiar—it’s up to Kailyn to identify the alumnus most likely to commit murder . . .

“If the killer had access to the bar,” I said, “he could have made Genna’s drink himself.”

Blake took exception to my theory. “It doesn’t matter how busy we were, we would have noticed if some stranger was suddenly working the bar with us.”

Joey fixed his friend with a sly smile. “Not so fast.”

Blake rounded on him. “What’s that supposed to mean?”

“There was a guy who came behind the bar that night. He said he was there to spell us if we needed the restroom. I figured Humphrey arranged –

“I did no such thing,” the manager interrupted. “There was no need for restroom breaks when the cocktail hour was just an hour.” He didn’t have a great way with words.

Joey gave a quick roll of his eyes for my benefit. When he was a kid, he must have spent a lot of time in the principal’s office. “I didn’t take the guy up on the offer anyway.  And I didn’t think about it again, until Ms. Wilde brought it up.”

Blake laughed. “Hey Joey, I know someone who’s got a bridge for sale.”

There was no humor in Joey’s expression. “Really? And what would you have done if that guy came over to you?”

“I would have told him he to get out, he didn’t belong back there.  And if Humphrey sent him, he could tell me himself.”

Anger flashed in Joey’s eyes. “Yeah right, your hindsight is twenty-twenty, but you wouldn’t have done anything different from me. You talk big, but you back down from real confrontations.” I don’t know if Humphrey or Blake understood what was happening, but I sure did. Joey didn’t like being the one who may have let a killer get past him without even questioning his unlikely story.

Blake grabbed a Waverly brochure off Humphrey’s desk, rolled it up and bopped Joey on the head with it.

“Cut it out,” Joey snarled, pulling the brochure out of Blake’s hand and tossing it behind him.

Humphrey opened his mouth, but nothing came out. He tugged at the knot in his tie. Beads of sweat blossomed on his upper lip. He’d be out two good bartenders if fists started flying, not to mention the potential for breakage. He glared at me as if it were my fault for demanding the meeting.

“Boys, boys,” he cajoled, “there’s no reason for animosity here. We’re all on the same side. Fighting among ourselves won’t help Ms. Wilde find the killer.”

“Joey,” I said, hauling the conversation back on track, “did you see that man again during the night?”

He combed his hair back in place with his fingers. “Matter of fact, I did. He was wandering around the room with a glass in his hand. I thought maybe he was working security too.”

“It’s called blending in with the crowd.”

Listening to them, reminded me of the way Elise’s kids bickered. I suspected these two had been friends for years. “Did you see this guy doing anything suspicious?” I asked.

Joey shrugged. “I was busy and it wasn’t like I was told to keep track of him. It was before that woman was killed. And it’s not like he was wearing a blinking sign that said KILLER.”

Blake laughed. “Now that would have made for an interesting resumé.” Humphrey tried to contain himself, but a chuckle got away from him. He covered his mouth and swallowed hard, trying to regain control.

I ignored him. “Joey, can you describe the man?”

He scratched his head. “Five-ten, gray hair, between fifty and sixty – that‘s all I got.” It wasn’t much. He could have been describing more than half the population of the country.          I thanked everyone for their time and handed out my card with the usual request to call if they thought of anything else related to that night.

I’d left my car at home and walked the mile or so to the Waverly. With the temperature in the mid-seventies it was a perfect day to be outside, and I needed the exercise. On the way there I’d hustled, because I didn’t want to be late. Going home, I took my time. Tilly would have called if she needed me sooner.

I replayed the meeting in my head, trying to tease more information from what Joey and Blake said. The man who went behind the bar may well have been the one who poisoned Genna. He might have taken a cocktail glass and poured the poison into it, waiting for the perfect moment to add it to her drink. But even if he had been the instrument of Genna’s death, whoever paid for his services was the real killer.

Halfway home I forced myself to put the case on a back burner and focus on the simple pleasures of walking when there were no appointments to keep. A lawn mower growled in the distance, birds sang their unique melodies, tea roses sweetened the air, and sunlight sparkled off a freshly washed red convertible that made me think of open roads and wind in my hair. I didn’t hear the soft footfalls behind me, until it was too late.

Sharon Pape describes her writing career as having two stages. Back in the dark ages, before computers were in every household, she had three paranormal books published. The first one was condensed by Redbook Magazine, the first paperback original they had ever condensed. Around the same time, Redbook published her first short story.

Then life brought her an unexpected challenge that went by the name of breast cancer. When her treatment was over, she became a volunteer for the American Cancer Society’s Reach to Recovery Program and went on to be the program’s coordinator for Nassau and Suffolk Counties on Long Island. Several years later, with the help of her surgical oncologist and two other survivors, she started her own not-for-profit organization to provide information and peer support to newly diagnosed breast cancer patients.

Once the organization was running smoothly and didn’t require as much of her time, she returned to her first love – writing. During this second stage of her career, she’s been writing cozy mysteries with a paranormal twist and a splash of humor.

April 14 – Escape With Dollycas Into A Good Book – REVIEW

One thought on “Spotlight, Blog Tour, and Giveaway for This Magick Marmot, An Abracadabra Mystery, by Sharon Pape”