Alright, I’ll admit it — I have a borderline obsession with sheep.

I adore them. They are essentially overgrown dogs with the sweetest ruminative faces and tails that can wag when they are pleased to see you. In all honesty, I’ve tried to convince my husband that raising sheep in rural New Zealand is a viable retirement plan for the two of us. I mean you have to love a country where sheep outnumber humans by 7 to 1. But, so far he isn’t going for it.

Sheep are amazing animals. Consider the following fun facts offered up by Dave Thomas, retired head of sheep studies at the University of Wisconsin. (Yes, that is a legitimate occupation and perhaps my next career move if this writing thing doesn’t pan out.) Dave tells us that:

Naturally, these intelligent creatures figure prominently in my stories.  Died in the Wool, the fourth book in the Whisky Business Mystery Series, finds whisky distiller Abi Logan continuing to act as foster parent to a growing flock of sheep saved from being turned into c-h-o-p-s. All named for authors, Agatha (Christie) and Oscar (Wilde) have become deeply attached to their foster mother and live adjacent to the house.

Agatha and Oscar are protective, and like all sheep know their names and will respond when called. Aside from being guard sheep when necessary the flock is producing their share of wool. (A single sheep can produce up to thirty pounds of wool a year. Once pound of wool can make ten miles of yarn.) As if Abi didn’t get tangled up enough in the mysteries she solves, her flock is churning out more than 3,000 miles of wool a year.  Something has to give.

Abi is forced to find an outlet for the wool and becomes involved with a charity for women who are victims of domestic abuse that is funded by the proceeds of an artisan knitting cooperative. Abi donates her wool and her energies to the shelter known as the Shepherd’s Rest, but soon finds herself knee deep in a mystery.  As she tries to unravel a murder and a kidnapping at the shelter it becomes clear that at least on of the shelter’s benefactors is a wolf in sheep’s clothing. Watch as Abi and her wooly wordsmiths solve the case before things go from baaad to worse!

Died in the Wool:
A Whisky Business Mystery
by Melinda Mullet 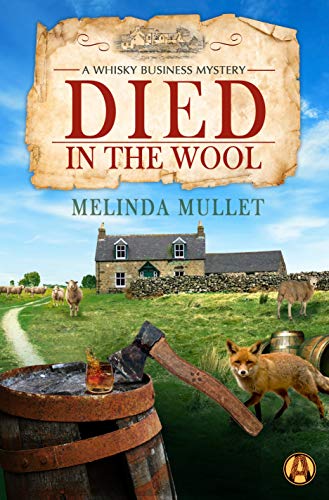 Died in the Wool: A Whisky Business Mystery

Photojournalist Abi Logan is finally ready to put her hectic career on hold and set down roots in the heart of the Scottish countryside. Studying the business and art of distilling whisky at Abbey Glen and volunteering at the Shepherd’s Rest women’s shelter in her spare time seem a surefire way to find the peace and stability she craves. It’s also the logical way to take her mind off her personal life. Abi’s business partner, Grant MacEwan, is facing a career-threatening disability, and as much as Abi longs to be there for him, he seems to prefer the company of a rival.

But as Abi becomes more involved with Shepherd’s Rest, she discovers that their refuge is elusive. When the shelter is rocked by a murder/suicide, Abi is outraged by the police’s lack of attention to these already marginalized women. Increasingly confident in her own skills as an investigator, Abi steps in to find out what the police will not: who left one young woman dead and another missing. But when more deadly deeds come to light, Abi must race to unravel the connections between the shelter’s benefactors and the women they have pledged to protect—and expose the killer before he strikes again. 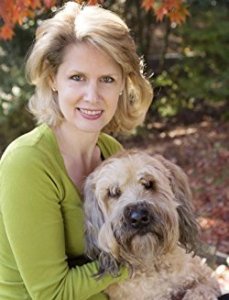 Melinda Mullet was born in Dallas and attended school in Texas, Washington D.C., England, and Austria. She spent many years as a practicing attorney before pursuing a career as a writer. Author of the Whisky Business Mystery series, Mullet is a passionate supporter of childhood literacy. She works with numerous domestic and international charities striving to promote functional literacy for all children. She lives in Washington, D.C., with her family.

June 25 – Escape With Dollycas Into A Good Book – REVIEW