This post was contributed by author Terry Ambrose. His new cozy mystery, The Scent of Waikii, is currently on tour with Escape with Dollycas into a Good Book.

The Big Island of Hawaii — more than just one volcano

I’m so happy to be here today! Thanks for having me as your guest. The McKenna Mystery series is set in Hawaii, which is getting a lot of attention right now due to Kilauea’s ongoing eruption. In addition to the volcano, however, there are other parts of the Big Island people never hear about. I’ve been fortunate to have been there several times and have photos from those trips, so let me take you on a little virtual tour of the Big Island of Hawaii. 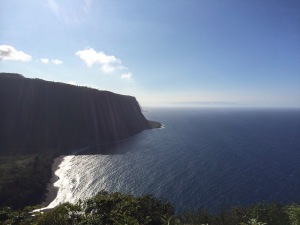 We’ll begin our journey on the north end of the island at Waipio Bay. While staying in the upcountry, which is less than an hour away, we drove to the scenic point at end of the road, where the beauty of the Pacific Ocean seems to stretch on forever. 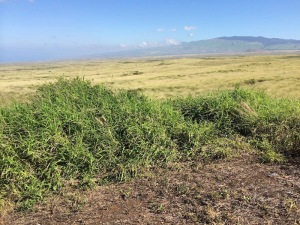 As we leave the upcountry and it’s cattle ranches, we travel through miles of rolling hills. At this point, we were ten to fifteen miles from the coast and could easily forget we were on an island. The peak in the background is Mauna Kea, one of the island’s five volcanos. As Kilauea is doing today, Mauna Kea wrought its share of devastation. While the last eruption of Mauna Kea was between 4,000 and 6,000 years ago, the threat of another eruption is still considered moderate. 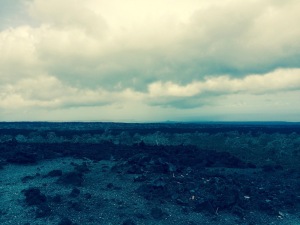 If we continue south, we pass through Kona and the many coffee plantations to a place where volcanic devastation can be seen very clearly. At Naalehu, there is a lookout that provides an explanation of the various lava flows and when they occurred. The lava field pictured here is from a Mauna Loa eruption in 1907.

Continuing south, we arrive at the southernmost point in the United States. Here, the average annual temperature is nearly eighty degrees and the area receives almost fifty inches of rain. But looking out over the lava, you’d never know there’s so much rain. This is a popular spot for fishing and for diving from the rocks.

Our journey around the Big Island takes us east to Hawaii Volcanoes National Park, where the terrain ranges from lush rainforest to solid rock. One of the easy sights to see is the Thurston Lava Tube, where the entrance is overgrown and an excellent example of how eventually even rock can serve as the home to a wide variety of flora.

If we continue our journey and head east through Hilo and then north, we’ll find ourselves in more lush backcountry. Here there are small housing developments, ranches, and farms. As you can see, some of the neighbors can be quite inquisitive. We met these guys at a house we rented for a week. While they didn’t stop by to visit each day, they did drop in periodically. Fortunately, there’s a fence that keeps them from wandering too far afield. 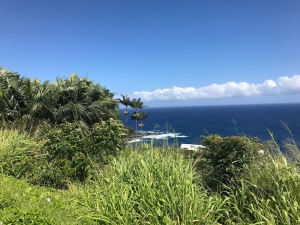 The last stop on our tour is nearly where we started. This is near the little village of Lapahoehoe. I first heard about Lapahoehoe from a friend who told me it was a “must see.” They were right. The waters here are stunning, the landscaping more shades of green than you can imagine, and the trade winds a constant delight. It’s hard to believe that on April 1, 1946 a schoolhouse in Lapahoehoe was inundated by a tsunami that killed twenty students and four teachers. At the park, a monument stands to commemorate the loss.

So, now you know the Big Island of Hawaii is more than just one volcano. Nobody knows how long Kilauea will continue to spew lava and ash. There may be more violent events in store, or the activity may simply subside. Only time will tell.