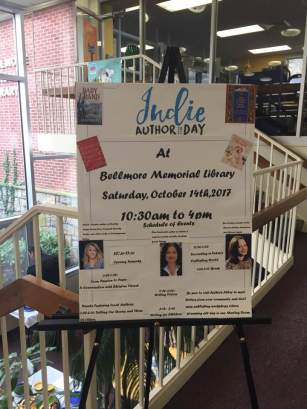 It was my pleasure to attend the Indie Author Day at the Bellmore Memorial Library on Saturday, October 14.  The day consisted of speakers, panelists, and authors who interacted with the local community. There was also publishing workshop videos streaming in the Meeting Room throughout the event.

The morning schedule included presentations by three speakers in the library’s community room outside of which snacks, water, and handouts were provided. The first speaker, Dina Santorelli, author of thriller and suspense novels who earned a degree in Creative Writing from Hofstra University, spoke about her experience as a self-published author and her success with her book, Baby Grand.  Santorelli explained how she made the decision to self-publish after having signed with an agent and attempting to sell her book to a traditional publisher. She chose to go the Indie author route to have more control over the production and marketing of her book. Although she had to invest her own money in cover designers and editors, Santorelli was able to sell 100 copies of her book in the first month after it was released and has currently sold tens of thousands of books. She described some misconceptions about self-publishing and explained how most sales of books today are from Amazon eBooks. She said that social  media, particularly twitter, is of utmost importance to authors for them to be discovered by a world-wide audience.

The second speaker was Ellen Meister, author of Dorothy Parker Drank Here, Farewell Dorothy Parker, and other contemporary works. Meister gave suggestions on how to hook a literary agent. She pointed out the advantages of signing with one and gave an overview of what agents did for authors. She also offered tips on what authors should do before they query an agent including the type of research about the agent they should do and where to find the information. She then described the parts of the query letter and what happens if an agent is interested in an author’s query.

The final speaker of the morning was Jan Kardys, literary agent and founder of the Unicorn Writers Conference whose experience working with a large number of traditional publishing houses allowed her to offer her clients creative and unique opportunities to attract a large publisher. She gave examples of how she helped one of her clients build a platform and a brand for herself. She also stressed the importance of social media especially Facebook and Linkedin. She discussed popular resources for writers to help them locate information about agents and publishers, and she also spoke about the importance of copyrighting one’s work. She recommended meetup groups and networking with other writers.

Following a brief break, the program continued with panels of local authors on topics that included, “Telling Our Stories and Those of Others;” “Writing Fiction,” and “Writing for Children.”

In addition to the speakers and panelists, other authors sold their books at tables on the main floor of the library in “Author’s Alley.” There were also giveaways and raffles, and the community had a chance to speak directly to local authors about their unique experiences whether they self-published, published with a small Indie publisher, or published traditionally with a larger publisher.

The Reference Librarian who helped organize the Bellmore Library’s first ever Indie Author event was Martha DiVittorio. She did a wonderful job selecting speakers, panelists, and local authors. The event was well attended, informative, and a great success.