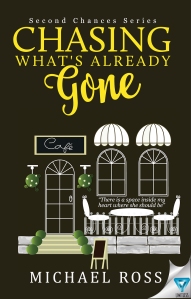 ‘There is a void inside my heart where she should be.’

His wife seems distant, yet perfectly happy. They work on different schedules and pass like ships in the night. But that’s how marriage is after so many years, right?

When Danny meets a mysterious girl, his idea of the meaning of love shatters at his feet…

She’s not extraordinary, but somehow she’s so much more than just another girl. When he catches her gaze, he knows deep in his gut that she’s the one—the love of his life. But being a decent guy, he holds his feelings in check, and there is no ulterior motive when he shares a coffee with her. As she leaves, she gives him a business card. That’s all there is to it.

Her name is Ella. And after that, she is nothing more than a fond memory.

Danny puts Ella out of his mind and moves on with his life—until his world falls apart…When his wife confesses to having an affair and demands a divorce, his life is thrown into chaos. It’s a challenge adjusting to the single life, but it’s not impossible. As time passes, he continues to reminisce of his brief encounter with the woman he’s sure was his chance at true happiness.

How far is Danny willing to go in the pursuit of love? How far would you when, in all probability, you are only…
Chasing what’s already gone?

\\\\\ Meet the author: MICHAEL ROSS /////
It was a strange and twisting road that led to the publication of my first novel. From my humble beginnings, as an office clerk, to ownership of a multi million dollar business I always maintained my love for literature.

Born and raised in Bristol, England. I spent most of my life in business, my companies turning over in the region of $500 million. The majority of that time marketing cars, eventually owning the largest Saab specialist in the world, before a bitter divorce forced me rethink my priorities. Particularly between 2003 and 2005 when I had to accept that I was no longer a millionaire but literally penniless. I avoided bankruptcy by the skin of my teeth and slowly rebuilt my life

This led me to the life changing decision to leave the bustling city and move to live halfway up a mountain in the Welsh valleys. At the same time I started a part time six year English Literature course at Bristol University, and attended creative writing classes at Cardiff University. I left school at sixteen and this was my first taste of further education and an immense challenge.

I eventually adjusted my thinking to the academic life, and on 30 June 2015 had confirmation of my 2.1(Hons) degree from Bristol University. At the same time I also won the prestigious Hopkins Prize for my essay on Virginia Woolf and the unsaid within her text. Now the university courses are finished it will, with any luck, gives me plenty of extra time that I can devote to my fiction writing.

Thanks to the university experiences, my interest in English literature has flourished over recent years. Hopefully I have evolved as a writer from my earlier work in short stories (over ninety of them.) Although interestingly my first three novels have all been developed from a long forgotten short story.

Life is, once again, very good, and I live very happily halfway up a mountain, in the Welsh Valleys, with my wonderful partner Mari, and our rescue dog Wolfie.