Competitive tennis player Carter Cook wants a taste of freedom. Her overprotective father monitors every aspect of her life, so when he becomes employed by Vladimir Ivanov—a sexy Russian with an array of tattoos and an accent that weakens her knees—a bit of danger is within Carter’s grasp. Behind her father’s back, she enjoys spending time with Vladimir at his lavish estate. But is he really the upstanding businessman she believes him to be? 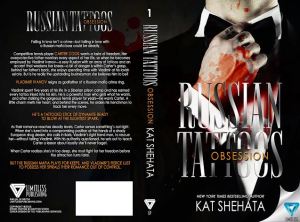 Vladimir spent five years of his life in a Siberian prison camp and has earned every tattoo inked into his skin. He is a powerful man who gets what he wants, and after stalking the gorgeous tennis player for years—he wants Carter. A little charm melts her heart, and behind the scenes, he orders his henchman to track her every move.

He’s a tattooed stick of dynamite ready to blow at the slightest spark.

As their romance reaches deadly levels, Carter senses something’s not right. When she’s lured into a compromising position at the hands of a shady European drug dealer, she calls in Boris, Vladimir’s right hand man, to rescue her—without telling Vladimir. With his authority questioned, he sets out to teach Carter a lesson about loyalty she’ll never forget.

When Carter realizes she’s in too deep, she must fight for her freedom before the attraction turns fatal.

But the Russian mafia plays for keeps, and Vladimir’s fierce lust to possess her spirals their romance out of control.

Tagline: “Playing with the mafia is a dangerous game…”

MEET THE AUTHOR: Kat Shehata went to school with a bunch of animals—literally. She is a graduate of the Cincinnati Zoo’s Animal Conservation and Care Program. Her first career involved caring for exotic, dangerous, and adorable animals as a zookeeper.

She has had her shirt ripped off by a jealous orangutan, hand-fed grapes to fruit bats, played tug-o-war with a three-toed sloth, and escorted an elephant down Pete Rose Way in the Cincinnati Reds Opening Day Parade. As an author, Kat weaves her love of animals into her work. She is the co-author of New York Times bestseller Animals on the Other Sidewritten with Sylvia Browne.

As a competitive tennis player, she spends her free time smashing tennis balls, cheering on her teammates, and playing matches in a recreational league. She lives in Cincinnati, Ohio with her husband, three kids, and an enthusiastic poodle.

She holds a bachelor’s degree in theatre from Wilmington College, a professional writing certificate from the University of Cincinnati, and a master’s degree in creative writing from Spalding University.