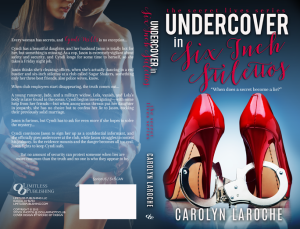 Every woman has secrets, and Cyndi Mills is no exception…

Cyndi has a beautiful daughter, and her husband Jason is totally hot for her, but something is missing. As a cop, Jason is extremely vigilant about safety and security, and Cyndi longs for some time to herself, so she takes a Friday night job.

When club employees start disappearing, the truth comes out…

A young runaway, Jade, and a military widow, Lola, vanish, and Lola’s body is later found in the ocean. Cyndi begins investigating—with some help from her friends—but when anonymous threats put her daughter in jeopardy, she has no choice but to confess her lie to Jason, rocking their previously solid marriage.

Jason is furious, but Cyndi has to ask for even more if she hopes to solve the mystery…

Cyndi convinces Jason to sign her up as a confidential informant, and she officially goes undercover at the club, while Jason struggles to control his jealousy. As the evidence mounts and the danger becomes all too real, Jason fights to keep Cyndi safe.

than the truth and no one is who they appear to be.

Carolyn LaRoche grew up in snow country but fled the cold and ice several years ago. She now lives near the beach with her husband, their two boys, two finicky cats and one old dog. When she is not at the baseball field cheering on big hits and home runs, she is busy teaching science to unwilling teenagers.