I hope you’re all doing well. During this pandemic, the focus is on health which reminds us how important it is to our well-being. I recently took a fall and received a minor if not aggravating injury to my rib cage. I have to limit my lifting and modify some of my other activities including my exercise and household tasks. I’m lucky that my accident wasn’t worse, but it made me realize how easy it is to become hurt or ill and that every day of health shouldn’t be taken for granted.

While I had some bad luck this past week, I’ve also received some good news. I’ve been elected an officer on the Cat Writers’ Association’s council. As a long-time member of this organization that supports and promotes all cat-related media, I am honored to have been elected.

Another piece of good news that I’m happy to report is that my two rescue cats, Harry and Hermione, are featured in the new release, Second-Chance Cats: True Stories of the Cats we Rescue and The Cats Who Rescue Us, that will be published on September 15. This book also includes rescue stories by several other Cat Writers’ Association members and is available in hardcover, paperback, audio, and eBook.

My story about Harry and Hermione and other fateful experiences are included in Chapter 13 of Why People Believe in God: True Stories of  Encountering God by Reverend John H. Krahn.

All 3 of my cats, Harry, Hermione, and Stripey appear in fellow CWA member Sandra Toney’s article about bedtime routines which can be read here.

Most of my writing involves cats, sometimes mine and sometimes fictional ones based on mine. Although I write mostly mysteries, I recently submitted a science fiction tale featuring alien cats to the new Red Penguin Collection’s What Lies Beyond, a science fiction anthology. They are accepting submissions through September 15 for this anthology and will publish future anthologies featuring different themes. Check the website for more details and, while you’re there, check out the other exciting opportunities with Red Penguin Books including their author podcasts and new literary journal. https://redpenguinbooks.com/the-red-penguin-collection/

I’ve submitted my 5th Cobble Cove cozy mystery to Solstice Publishing and hope to have some updates about it in the October Author News. In the meantime, here’s a tentative blurb for No Gravestone Unturned.

It’s October in Cobble Cove, and Alicia is busy preparing for the library’s Halloween party when she learns that John’s aunt from Florida has died and that John’s cousins and their spouses are coming to town to bury their mother. The day after the funeral, the caretaker’s son is found dead by John’s grandfather’s gravestone, from a blow on the head. The only witness seems to be Sneaky the library cat, who, having left the library, turned up at Alicia’s door with blood and dirt on him.

As Alicia, Gilly, and Sheriff Ramsay investigate, a generation of family secrets is uncovered. Are one of the guests staying at the inn a killer? Will the humans solve the crime, and can Sneaky, Kittykai, and Salem, the inn’s guest cat, team up to help?

In October, I should also have more updates about Pet Posts: The Cat Chats, the non-fiction cat book that I’m self-publishing.

Lastly, I would like to ask two favors. My new standalone mystery, Memory Makers, is in the running for the AllAuthor September cover-of-the-month contest. It has made it to the second round. To get into the third round it needs to be in the top 50 books. The last day to vote for Round 2 is September 14. If Memory Makers gets into the third round, you can vote again for it starting on September 15. If you like the cover, please vote for it here.

The blog tour for Memory Makers ends on September 21. Follow it here for a chance to win a $10 Amazon gift card.

The second favor is to vote for Harry and Hermione in the Remember Me Thursday contest. If you vote for my story, I could win a prize and the Golden Paw Society, Inc., the rescue from which I adopted them, would receive some money to support their organization. This contest ends on September 30. Vote here to support Harry and Hermione and the Golden Paw Society Rescue.

My new mystery, Memory Makers, has been chosen as a contender for the September AllAuthor Book of the Month. I personally think the cover is outstanding and reflects the theme of my book. If you agree, please vote here: https://allauthor.com/cover-of-the-month/9222/

Thanks so much for your support.

Also, my blog tour for Memory Makers is still running until September 21. Follow it for a chance to win an Amazon Card giveaway and learn more about the book through spotlights, excerpts, and guest posts. 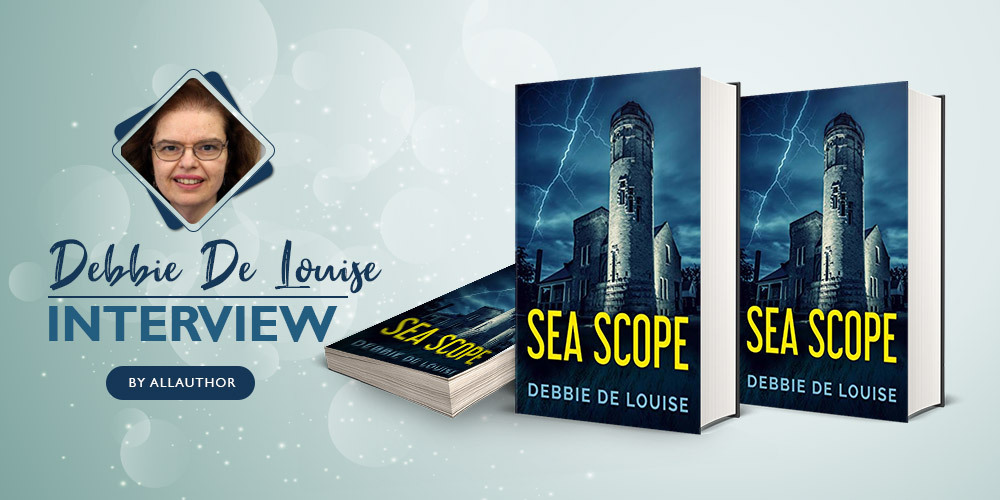 Born in Glen Cove on Long Island, Debbie De Louise is the author of seven novels. She chose to be a reference librarian at a public library because she enjoyed the atmosphere and the fact that she would be surrounded by books. Debbie De Louise shines in her fast-paced novels with a good story, with good characters, with good writing techniques. Read full interview…

My new release, Sea Scope, has been nominated for three awards. Below are the voting links and information about each contest. Every vote is greatly appreciated.

There’s a direct link to vote for Sea Scope in the AllAuthor cover contest. It’s in the last round and in need of votes. https://allauthor.com/cover-of-the-month/5140/

Sea Scope, has also been nominated for an Author Academy Award. All votes are appreciated. Please scroll to the bottom of page 10 where my book is listed in the mystery category. Thank you so much. (link: http://AuthorAcademyAwards.com)

Sea Scope is listed on the bottom of page 10 in the mystery category of the Reader’s Choice Awards.