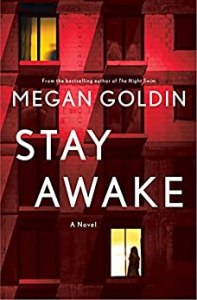 *Note: This book was an advanced reader’s copy from Net Galley. It will be published in August, 2022, but is available for pre-order now on Amazon at https://amzn.to/3lg4536

I was reading this book as I quarantined from COVID, and I finished it in two days. I definitely intend to read more books by this author. I was caught up in this story about a woman, Liv, who lost her short-term memories every time she fell asleep. This rare type of amnesia was thought to have been caused by a trauma she witnessed two years ago while working at a magazine called Cultura in New York City and dating a man named Marco.

The book is told in alternating chapters from the present time to two years ago, and there are also chapters that go back two days and a day. The current time takes place in twenty-four hours and begins with Liv awakening in a cab which she doesn’t remember boarding and being dropped off at a Brooklyn apartment that she shares with her friend, Amy. When she tries to enter, she realizes her purse is missing and, when she knocks, other occupants of the apartment answer and tell her that this is their place. Also missing her cell phone, Liv borrows a phone to call Amy and then Marco. Neither one answers her.

Not knowing what to do, she leaves the apartment and then realizes that she’s carrying a bloody knife wrapped in a t-shirt. Dumping it in a trash bin, she notices some writing on her hand with the name of a local bar and the words, “Stay Awake.” At the bar, she is greeted by the bartender who seems to know her, even though she doesn’t recognize him. A news channel is showing a breaking report about a murder of an unidentified man who was stabbed in an apartment rental. A clue left at the scene were the words “Wake Up” written in the victim’s blood on the window.

As the book flashes back and forth in time, readers learn that Liv is suspected of the murder that she can’t remember. Her previous trauma is also described as well as the people from her past, one of whom might be framing her for the murder.

I highly recommend this excellent thriller that will keep you on the edge of your seat. I was stumped as to the identity of the killer until a few pages before it was revealed.