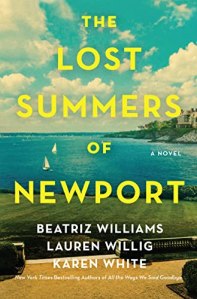 *Note: This book was an advanced reader’s copy from Net Galley. It will be published in May, 2022, but is available for pre-order now. https://amzn.to/3OsH4Hv

This book attracted me because it takes place in Newport, Rhode Island, a place I’m hoping to visit one day. Written by three popular authors, the story is broken up into three time periods: current day (2019); 1899, and 1958. It follows the Sprague Family who own a mansion in Newport. In the present time, the mansion is the focus of a television show called Makeover Mansion. One of the people involved in its production, Andie, is a single mother to her sister’s son. She takes on the project hoping to show viewers how a run-down old house can be renovated without changing its charm. However, the studio requests that she uncovers family scandals and the legend of the Lady in White, a ghost said to haunt the place. She and her crew have been given strict rules not to approach the owner of the home, Lucky “Lucia” Sprague, with any questions. They are also forbidden to film near the home’s boathouse. These rules are given by Lucky’s son, Lucas. His sister, Hayden doesn’t even approve of the show.

While working on the episode, Andie finds herself attracted to Lucas, although he’s the type of guy she’s avoided in the past due to a previous broken relationship. As she finds out more about the family, readers are shown events taking place in the past that reveal two secrets that changed the lives of Lucky and her relatives.

In 1899, a music teacher was hired to instruct Maybelle Sprague, the heir to the Sprague fortune, a “penny” heiress as they called her. The object of her music lessons was to enchant an Italian prince her step-brother hoped to marry her off to, so that he and his family could afford to continue to live in the mansion. In 1957, after Maybelle (now known as Nonna) escapes Italy with her granddaughter Lucky and returns to Sprague Hall, Lucky and her husband have marital problems due to his alcoholism and adultery. He also accuses her of having an affair with Teddy, a friend from Italy. While this isn’t true, Lucky has always been close to Teddy. As both the 1899 and 1958 events come to dramatic climaxes, the reader and Andi learn of two terrible secrets that have followed the generation of Spragues.

It was difficult to put this story down. While I had some difficulty following the changes in years and characters, it all made sense in the end. There were several twists I didn’t see coming. I recommend this book to anyone who enjoys mysteries, historical fiction, tales about mansions and rich people, alternating time periods, and interesting characters.