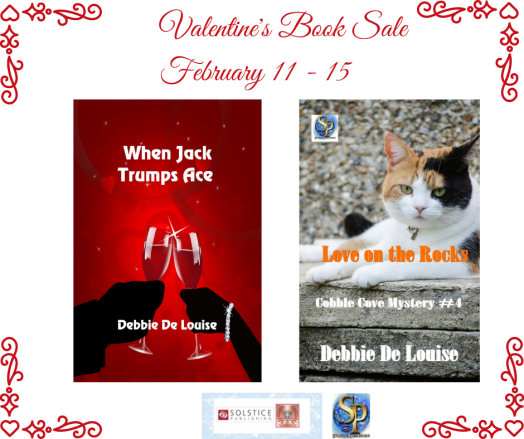 Two of my books are on sale from Friday, February 11. to Monday, February 15. My romantic comedy novella, When Jack Trumps Ace, and my cozy mystery, Love on the Rocks, are only 99 cents on these dates. 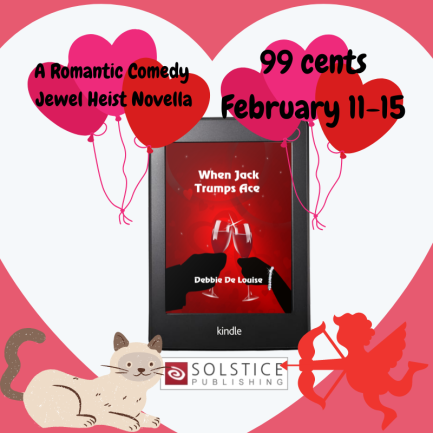 When her jewel-thief father is caught in the middle of a heist, Jackie makes her getaway to his ex-jail pal’s apartment. a man called Ace, who lives in an upscale neighborhood of Chicago. What she doesn’t count on is falling in love with him and becoming his partner in crime. She also doesn’t expect to compete with Ace’s old flame or deal with his cat Roxie who causes her allergy attacks.

After Jackie discovers clues left by her father which lead her to a treasure that Ace may have stolen, she contemplates her next move. Should she trust Ace and believe her father gave him the money, or head home to her mother, a religious hypocrite who would have no qualms about ratting out her own daughter to the cops?

Before Jackie can decide who the good guys really are, she finds herself atop the Willis Tower carrying her father’s ashes in her pocket and aiding Ace in the largest jewelry heist of his life. Things go terribly wrong, and Jackie’s only choice seems to be to walk away from Ace or face imprisonment. 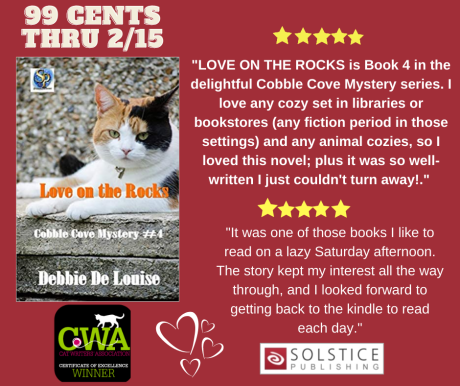 It’s February in the small town of Cobble Cove. Love is in the air . . . but so is murder!

When Alicia helps plan a Valentine’s Day Party at the Cobble Cove library that also includes a surprise for her newlywed friend, Gilly, things go wrong when a mysterious box of chocolates addressed to the director turns out laced with poison.

Clues Lead to A Dead Suspect

Although Alicia promised John she’ll no longer meddle in crime investigations, she and Gilly set out to find the person threatening Sheila who murdered the courier of the deadly candy. The three people they suspect include the professor from California who’s been romancing Sheila while she assists him with research for his book; the obnoxious patron Rhonda Kleisman who threw coffee at the director after refusing to pay for a damaged book; and a visiting widow staying at Gilly’s inn who’s unnaturally curious about Sheila and earns the nickname of Madame Defarge for her interest in knitting.

While Alicia and Gilly are trying to solve this new Cobble Cove mystery, Sneaky is introduced to Gilly’s new kitten, Kittykai, a calico she brought home from her honeymoon in Hawaii. It’s not like at first sight, but the two cats eventually become friends. They also both play a part in foiling the killer’s murder attempts, but will Alicia and Sheila survive unscathed?

My time-travel novel, Time’s Relative, is now available on audio. A limited number of free copies are available. Contact me for information. 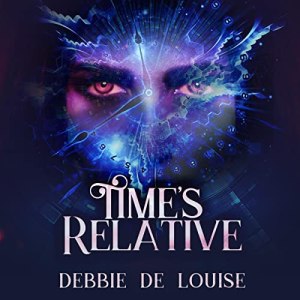 My calico, Hermione, is running in America’s Favorite Pet contest. She is a sweet and beautiful 3-year-old girl. All votes are appreciated. 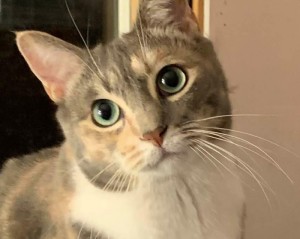 Thank you so much. Here’s the link to Hermione’s page:
https://americasfavpet.com/2022/hermione-cf74