I can’t believe it’ll be 3 years this summer since I lost my mother. Her picture sits on my bookshelf, and I talk to it sometimes. I try to tell her about the things she’s missed and how much I miss her. I’ve told her about the two kittens, now grown cats, that I rescued three months after she died. I know, as a cat lover and the person who taught me how to be kind to animals, she would’ve loved them as much as I do. I show her the new books I’ve written. She was always so proud of me up until she began to forget that I was an author as she slipped into dementia. I tell her about her smart and lovely granddaughter who has another year of high school before she goes to college and how I hope I’m being as good a mother to her as she was to me.

I remember how she raved about the award I won for my writing in college and how she was so happy at my graduation from library school. I recall how she persuaded me to apply for the open position at the library where I’ve now worked for 30 years. 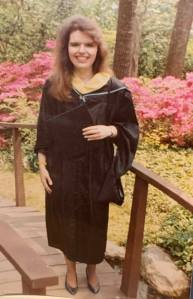 I miss our lunches together when we celebrated our birthdays, and today on her birthday, I miss them even more. I remember the sad times, too. The pain and confusion she often felt and how she hated me to leave her when I visited her at the nursing home. I wish I could’ve spent more time with her, that I didn’t have to go to work or finish a book or pick up my daughter from school or summer camp. I spent half my life with her, and she always considered me her baby because I was the youngest. It was tough for her to say goodbye when I got married, but I knew she was happy for me. 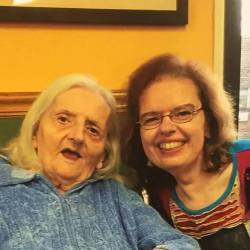 In some ways, it was a mercy that she left when she did. I know she was lonely, and no one could fill that emptiness. I know she was bored with time she no longer grasped but that moved too slowly. I know she hated to be in a wheelchair and that so much of her daily activities were dependent on others. She’d raised four children and married at 17. She didn’t have the easiest life, but her family meant the world to her, and, coming along after her older kids were nearly grown, I was the baby she didn’t expect but was so glad to have.

It was also a mercy that she never lived through COVID. It would’ve been even harder for her being isolated further, and it was possible she would’ve caught the virus and died like some residents who’d lived with her. Before she began losing her memories, she would get upset if I didn’t call her every day and called me to complain. Sometimes I found that annoying, although I realized it was because she worried about me. I missed those calls when they no longer came. Now I tell her I’m okay. I’m still working at the library and being careful. I tell her not to worry.

So I wish her a happy birthday as I look at her photo. She’d be 93 now. I tell her I hope she’s with Dad and Oliver, the Siamese cat she so loved and whom I adopted when she could no longer care for him. I also hope she’s with her own mother, her father, and her beloved older sister who passed away without her knowing a year before she did. Even if she’s with all the ones she loved while alive, I know she’s still with me and always will be.