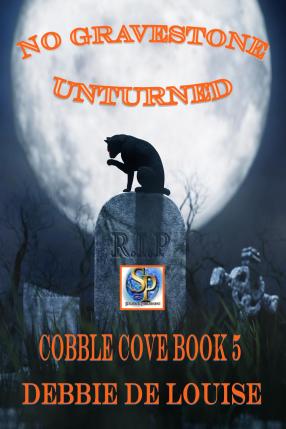 It’s October in Cobble Cove, and Alicia is busy preparing for the library’s Halloween party when she learns that John’s aunt from Florida has died and that John’s cousins and their spouses are coming to town to bury their mother. The day after the funeral, the caretaker’s son is found dead by John’s grandfather’s gravestone, from a blow on the head. The only witness seems to be Sneaky the library cat, who, having left the library, turned up at Alicia’s door with blood and dirt on him.

As Alicia, Gilly, and Sheriff Ramsay investigate, a generation of family secrets is uncovered. Are one of the guests staying at the inn a killer? Will the humans solve the crime, and can Sneaky, Kittykai, and Salem, the inn’s guest cat, team up to help?

Have you read the 4 full-length books in the series and the three short eBooks? Find them and my other books here.