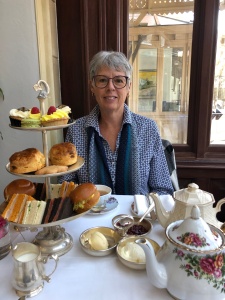 But I’ve left all that behind and now I’m writing cozies. I have four cozy series on the go right now – the new Tea by the Sea series, the Year Round Christmas series, the Sherlock Holmes Bookshop series and the Lighthouse Library series by Eva Gates. And I’m loving writing cozies.

The latest book is Tea and Treachery, the first in the Tea by the Sea series (July 28, 2020 from Kensington). They’re about a woman who moves to Cape Cod to open an traditional afternoon tea room adjacent to her grandmother’s B&B.  Lots of baking ensues, as does murder and mayhem.

Sounds a bit silly? Sure it does. And it’s supposed to be. It’s nothing but fun, and what’s wrong with that?

I’ve come to realize that cozy mysteries are about real people living real lives (except for that pesky murder bit), although writ large. Everything is exaggerated. The nosy neighbour is nosier, the ditzy friend is ditzier, the mean girl is meaner. And the handsome man is, well, handsomer.  Even better if there are two of them.

After putting in my time writing police procedurals and psychological thrillers, I’m having a lot of fun writing cozies.  Keep it light, keep it funny, and have a good time with it.

Cozy mysteries are not trying to make an important statement about the human condition, or hoping to change the world. A cozy mystery tells a story that attempts to be entertaining, that’s about people much like us (or like us if we were prettier, or smarter, or younger!) and our friends and family.

Cozy mysteries are very much ‘puzzle mysteries’: a game of wits between the author and the reader as to whether or not the astute reader can solve the crime before the amateur detective does (i.e. before the author reveals it). Clues must be laid down in such a way that the reader has a chance of reaching the conclusion on their own.

Cozies don’t have a sense of tragedy. People do not live tragic lives and they don’t fear tragic happenings. Someone is murdered, and that’s never funny, but they are generally not much liked by the community or strangers to it. Their death needs to be solved so that the perfect, orderly community can go back to the way it was – perfect and orderly.  The characters live in an essentially good world that needs to be put back to rights. No human trafficking rings, child prostitutes, mob hit men, Alt-right thugs, or Russian assassins here.

So pull up a pull up a comfortable arm chair or get out your deck chair. Light a fire in the fireplace, or slap on that sunscreen, pour yourself a mug of hot tea or something icy and simply enjoy the adventures of Lily, Bernie, and Rose at Tea by the Sea.

Tea & Treachery (Tea by the Sea Mysteries)
by Vicki Delany 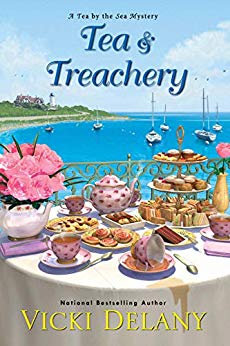 In this charming new cozy mystery series from nationally bestselling author, Vicki Delany, a New York City expat-turned-Cape Cod tea shop owner must solve the murder of a local real estate developer to help her feisty grandmother out of a jam . . .

As the proud proprietor and head pastry chef of Tea by the Sea, a traditional English tearoom on the picturesque bluffs of Cape Cod, Roberts has her hands full, often literally. But nothing keeps her busier than steering her sassy grandmother, Rose, away from trouble. Rose operates the grand old Victorian B & B adjacent to Lily’s tea shop . . . for now. An aggressive real estate developer, Jack Ford, is pushing hard to rezone nearby land, with an eye toward building a sprawling golf resort, which would drive Rose and Lily out of business.

Tempers are already steaming, but things really get sticky when Ford is found dead at the foot of Rose’s property and the police think she had something to do with his dramatic demise. Lily can’t let her grandmother get burned by a false murder charge. So she starts her own investigation and discovers Ford’s been brewing bad blood all over town, from his jilted lover to his trophy wife to his shady business partners. Now, it’s down to Lily to stir up some clues, sift through the suspects, and uncover the real killer before Rose is left holding the tea bag.

Vicki Delany is one of Canada’s most prolific and varied crime writers and a national bestseller in the U.S. She has written more than thirty-five books: clever cozies to Gothic thrillers to gritty police procedurals, to historical fiction and novellas for adult literacy. She is currently writing four cozy mystery series: the Tea by the Sea mysteries for Kensington, the Sherlock Holmes Bookshop series for Crooked Lane Books, the Year Round Christmas mysteries for Penguin Random House, and the Lighthouse Library series (as Eva Gates) for Crooked Lane.

Vicki is a past president of the Crime Writers of Canada and co-founder and organizer of the Women Killing It Crime Writing Festival. She is the 2019 recipient of the Derrick Murdoch award for contributions to Canadian crime writing. Vicki lives in Prince Edward County, Ontario.

July 27 – This Is My Truth Now – REVIEW, AUTHOR INTERVIEW

July 29 – Reading Is My SuperPower – REVIEW

3 thoughts on “Guest Post and Blog Tour for Tea and Treachery, A Tea by the Sea Mystery by Vicki Delaney”