This may be slightly early, but it’s only because I have a lot of news to share with you all. Including several events coming up this week.

On Wednesday, July 29 at 12 noon, I’ll be appearing on the Crimeless Cat on Facebook talking about my cats, cat books, and more. If you can’t make it, the video will remain up on that page to be viewed later.

On Friday, July 31, at 1 p.m., I’ll be participating in an author takeover on the Cozy Mystery Village where I’ll be sharing information about my Cobble Cove cozy mystery books and stories and also hosting a giveaway.

On Wednesday, August 5, I’ll be appearing on Stephanie Larkin’s Between the Covers TV show at 7 p.m. EST.

On Saturday, August 8, I’ll be attending the Cat Writers’ Association’s virtual awards ceremony where I and fellow members will learn if we’ve won muse medallions or other awards for our contest entries. I’ve already received three certificates of excellence for them. There will also be raffle prizes and special guest presenters. Everyone is welcome to attend. The event page for this pawsome event is here: https://www.facebook.com/events/310318276778464/ 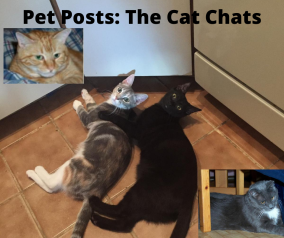 Also, in August, I will be self publishing a non-fiction book called Pet Posts: The Cat Chats that include blog posts and articles “written” by my current cats and those from twenty years ago. The posts will include feline health, behavior, and humorous articles. I don’t have a cover to share yet, but here’s a teaser featuring the 4 cat “authors” of the book.

Last but not least, my new release, Memory Makers, will be on blog tour with Silver Dagger Book Tours from August 21 to September 21. It will feature a great giveaway. More details will follow.

I hope you’ll be able to attend, view, or participate in my July and August events and look for the publication of my forthcoming cat book.