As a librarian, I’m able to get ARC’s (Advanced Reader Copies) of forthcoming novels. Here’s my review of The Last Wife, a psychological thriller, by Karen Hamilton. It will keep you turning the page. It releases July 7 and can be pre-ordered on Amazon. 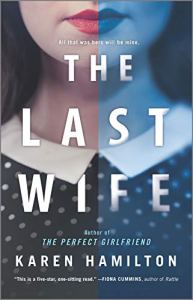 The Last Wife by Karen Hamilton

Marie is a photographer. She catches things in the photos she shoots including the wonderful life she thinks her friend Nina leads and which she’d like to have. But it’s true that you need to be careful what you wish for,. When Nina dies leaving two young kids and a husband, Marie grabs her chance at making Nina’s life her own. But after becoming pregnant and marrying Stuart, Marie discovers some secrets her friend Nina was hiding. One of them involves the death of Marie’s lover that happened while she, Nina, and a group of friends spent a holiday abroad in college.

This twisty, psychological thriller keeps you turning the pages as more secrets and lies are revealed until Marie learns the truth about Charlie’s death years ago and that the perfect life Nina led was far from perfect.

I caught the travel bug after an early childhood spent abroad (Angola, Malawi, Zimbabwe, Belgium and Italy) and have worked as cabin crew for a major airline. In 2006, my husband and I put down roots in Hampshire and four years ago, I gave up flying to raise our three sons and concentrate on my writing. Now that they are a little older, I’ve begun travelling again (as and when it’s possible) and enjoy exploring places through their fresh eyes.

The Perfect Girlfriend was my first novel, released March 2018. It is a psychological thriller about a sociopathic flight attendant, Juliette Price. The book is rooted in my work experience, but not autobiographical! I realised early on in my flying career, that the moment I changed out of uniform, I became anonymous. It made me think about the identities behind uniforms and work personas and became an idea that would later help create my protagonist.

The Last Wife is my second novel. It is mainly set in the New Forest (an area I love and where I spend a lot of time) and is due out summer 2020. Marie Langham takes over over her dead friend’s life, only to discover that she didn’t know her friend, Nina, as well as she thought. Nina’s secret past now threatens Marie. Many things sparked the themes for this book including my interest in psychotherapy, and another, my fascination with how well we can ever truly know someone.

I’m currently working on my third novel, a thriller which features worldwide travel, murder and mystery.