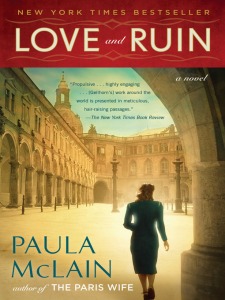 Popular historical fiction novelist, Paul McLain, who previously wrote about Ernest Hemingway and his first wife in The Paris Wife, tells the story of Hemingway’s third wife, Martha “Marty” Gellhorn. This book, however, isn’t just a love story. It is also a war story because we follow Marty who, after writing an unsuccessfully-reviewed novel, finds her niche as a war correspondent covering the news for Colliers with her famous husband as her rival.

Marty is courageous, driven, and determined to document the atrocities of the several wars she’s lived through including World War II. While devoted to Ernest, she needs to make her own name among journalists.

I found this novel a riveting, fast-paced, and interesting look at the horrors of war and the personal glimpses into the life of one of America’s most famous novelist. As a writer myself, I related to Marty’s struggle making a name for herself in a competitive field that, at that time, was predominated by male authors. I highly recommend this read to those interested in history, biographies, and realistic fiction.

Paula McLain is the author of the New York Times bestselling novels, The Paris Wife and Circling the Sun. She now introduces her latest title, Love and Ruin.

Paula McLain was born in Fresno, California in 1965. After being abandoned by both parents, she and her two sisters became wards of the California Court System, moving in and out of various foster homes for the next fourteen years. When she aged out of the system, she supported herself by working as a nurses aid in a convalescent hospital, a pizza delivery girl, an auto-plant worker, a cocktail waitress–before discovering she could (and very much wanted to) write. She received her MFA in poetry from the University of Michigan in 1996.

She is the author of The Paris Wife, a New York Times and international bestseller, which has been published in thirty-four languages. The recipient of fellowships from Yaddo, The MacDowell Colony, the Cleveland Arts Prize, the Ohio Arts Council and the National Endowment for the Arts, she is also the author of two collections of poetry; a memoir, Like Family, Growing up in Other People’s Houses; and a first novel, A Ticket to Ride. She lives with her family in Cleveland.

Connect with Paula on