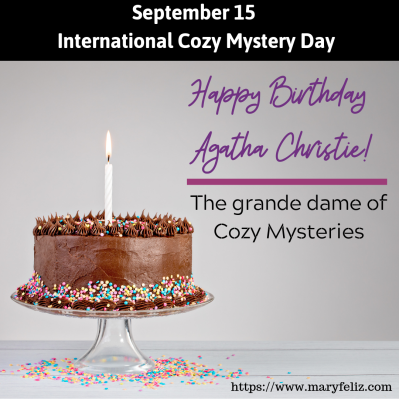 We celebrate International Cozy Mystery day on September 15, the birthday of Agatha Christie. For those who don’t know what a cozy mystery is, it’s the type of writing that Ms. Christie was famous for. It involves murder of the less gory kind and an absence of explicit sex and violence. It usually takes place in a small town. There can be recipes or pets as central themes in the mystery along with an off-scene murder to solve and a cast of quirky characters with interesting professions.

I write a cozy mystery series called. Cobble Cove mysteries, for the name of the fictional town in which they are set. It includes a librarian and a library cat. A reviewer of the first book of the series, A Stone’s Throw, termed the story, “Agatha Christie meets a small town librarian.” 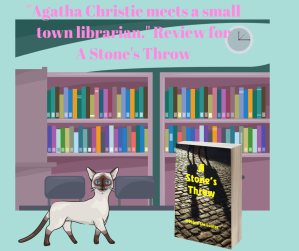 People enjoy reading cozy mysteries because they become familiar with the characters and like the settings. Some of my favorite cozies feature cats, as do mine. I’ve enjoyed fellow Cat Writer’s Association members books such as Carole Nelson Douglas‘ Midnight Louis series, Shirley Rousseau’s Joe Grey tales, and, Mollie Hunt’s Crazy Cat Lady series. For food-related mysteries, I like Joanne Fluke’s Hannah Swenson mysteries. Mary Feliz, who provided some of the graphics included in this post, is a fellow Sisters-in-Crime member, and also a cozy mystery author who writes the Maggie McDonald series that features a Golden Retriever. Another SINC member, Marilyn Levinson who writes as Allison Brook writes a cozy that features a librarian and a ghost. Her latest in the Haunted Library series, Buried in the Stacks, was just released. A fellow author from Next Chapter, James J. Cudney IV, writes mysteries taking place on college campuses. The fifth book in his Braxton Campus mysteries, Haunted House Ghost, was also just released.

Do you have a favorite cozy mystery author or series, or haven’t you read a cozy mystery yet? Have you read any of mine? I’d love to hear your comments.