A galaxy under attack… youth out of control… extreme measures are called for… until the citizens are faced with impossible choices.

Good day and welcome to the release of Crèche Terrenium. This book was written many years ago, when I was first starting out in my writing career. I submitted it to Millennial Science Fiction and Fantasy Magazine as a 5,000 word short story. This was during the days of snail mail submissions and waiting months on end to hear back from the editor in chief. To my surprise, I heard back rather quickly, about six weeks. Figuring they’d laughed and sent me a letter telling me that I should quit writing, I waited a couple of days before reading the bad news. Well, it wasn’t a contract to have the short story published in their magazine. What I did get was a letter telling me that the then editor in chief loved the concept of my short story and wanted me to develop it into a full book before resubmitting.

The full book was written, critiqued, edited, rewritten, etc. over a period of six months of sleepless nights and fingernail chewing days. I finally resubmitted the new story to the editor in chief per her request, only to hear back nearly immediately. The thin envelope pretty much told the story before I opened it.

Turns out while I was breathing life into this novel, the editor in chief had been replaced with someone else. That individual bluntly informed me that they were no longer interested in teen sci-fi books, as “teens didn’t read.” Who was I to argue? I knew the book was good. All I had to do was wait for the right time and place to present it to the world.

The time is now. The place is here. Enjoy!

The Melane Galaxy has a problem, one that threatens their very existence. Led by a reporter, Susannah Tilotsen, the citizens demand a solution to their children terrorizing people. Yet, when Chairman Marcus Sterling institutes the Crèche system, Susannah feels deep shock and dismay.

The children will be taken from their parents and raised by a computer designed to educate and monitor them. No adults will have interaction with the youth of the galaxy. The overall goal is to create good citizens of the youths rather than out of control hooligans.

Is this solution good intentions by the leadership? What if a parent protests the loss of their child? What choice do they have? 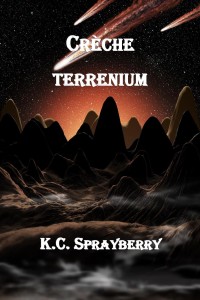 Youth out of control… Citizens demand a solution.

A law enacted to deal with recalcitrant children lays the blame on their parents. Only a computer can properly change The Melane Galaxy’s youth and turn them into good citizens. Chairman Sterling must force people to realize that parents aren’t right for raising children.

Susannah Tilotsen discovers she’s being used by a government attempting to parent children. She soon realizes no one is safe from this new law. The loss of her beloved husband and her daughter being forcibly taken to Crèche Terrenium drives her to organize a group determined to stop this madness

Ripped from his loving home, Joey Dinaldo is taken to Crèche Terrenium after government troops find him living with his parents. He works hard to be a good citizen and obey the rules but soon discovers he can’t support a system designed to turn children into uncaring robots.

Master, the computer system that will raise these children, controls every second of their lives. Yet, there is no one to maintain the machine. The computer never thinks it needs to be repaired, even as the control it exerts slowly erodes. It is perfect, and fights to keep from being destroyed.

Rebels refuse to stop fighting until they have closed down the Crèche system and returned the children to their parents. Or find them a guardian. All of them are willing to do whatever it takes to end this madness… but at what cost?

Black words on the creamy parchment in her hand numbed Susannah Tilotsen. Shivers racked her spine; fear deadened her fingertips. Her grip loosened and the document fluttered to her feet. The forty-something man in front of her caressed his silver-shot sable hair before spreading his hands. She watched the public façade take over as the benevolent leader of a fractious, crumbling galaxy smiled.  She knew better. His duplicitous expression sent chills up her spine.

She looked at the settlement she was reporting on to a galaxy awaiting a solution for a growing problem. The gray on gray buildings depressed her. The same hue was repeated in the walkways and latticed worked fences enclosing the twelve living areas. The children who soon call this place home would have no relief from the depressing shades of grey.

Living a dream she’s had since she first discovered the magic of books. K.C. Sprayberry traveled the U.S. and Europe before finally settling in the mountains of Northwest Georgia. She’s been married to her soulmate for nearly a quarter of a century and they enjoy spoiling their grandchildren along with many other activities.

A multi-genre author, K.C. Sprayberry is always on the hunt for new stories. Inspiration strikes at the weirdest times and drives her to grab notebook and pen to jot down her ideas. Those close to her swear nothing or no one is safe if she’s smiling gently in a corner and watching those in the same room interact. Her observations have often given her ideas for her next story, set not only in the South but wherever the characters demand they settle.

Find out more about my books at these social media sites: