I’m proud to announce the release of my new mystery, Reason to Die.

Someone is strangling disabled people in the small town of Baxter, Connecticut. Detective Courtney Lang and her ex-partner and ex-lover, wheelchair-bound Bill Thompson, are paired up again and put in charge of the investigation. During the course of their search, Courtney uncovers information that points toward a connection between the murders and an unsolved series of muggings by a masked man, the same man who shot and disabled Bill a year ago on the night he proposed marriage to her.

Complicating matters for Courtney is her guilt about Thompson’s shooting, her affair with her new partner, Mark Farrell, and her unresolved feelings over the deaths of her mother and sister who perished in a fire while she was away from home.

As the deaths accrue and the “Handicapped Strangler” as the killer is coined by the press continues to rampage the town adding victims of different ages, sex, and disabilities to the murder count, Courtney discovers a clue that could crack open the case but may put her and Bill’s life in jeopardy. 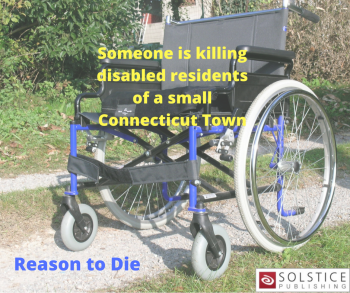 As Agnes walked to the bathroom now, she tapped her cane around in habit. She knew the twenty steps down the hall by heart. She had her own built-in GPS. But the cane was a comfort, a guide she hesitated to give up.

When she was through taking care of her needs, she started back to the living room. Chirpy suddenly began squawking. She thought he was resting. Something had stirred him. Then she heard a noise by the front door. Someone was on her step.

“Settle down, Chirpy. Looks like we have a visitor,”she said as she cut across the room to answer the light knock. The bird continued to squawk. She wondered why he was so excited.

“Who is it?” she called when she got to the door.

How very strange. She’d had a delivery of the audio books last week, and they usually only arrived once a month in a box delivered by the mailman. Maybe there had been a mistake.
“I haven’t ordered any new books,” she said, “and they usually come in the mail.”

“No mistake, Ma’am. Talking books are being hand delivered now. Can you please open the door and take them? I have several more stops to make today.”

Agnes hesitated a moment. Chirpy had finally quieted down. Edna would probably scold her for letting a stranger in the house just because he claimed he had audiobooks for her, but he sounded nice enough. He sounded a lot like the kind librarian from the Helen Keller Library who visited yesterday.

Reaching up, she unlatched the safety lock and then twisted the doorknob. She heard the man step forward. He closed the door behind him and then pushed her to the ground. Her cane flew away. She tried to grab for it, but it was out of reach. It happened so fast, a scream lodged in her throat as he put his gloved hands around it and squeezed. From a hazy distance of fear, she heard Chirpy start squawking again. The pressure on her throat tightened. She couldn’t yell or even talk. Blackness engulfed her as the gray shadows of her limited sight dissolved. All she could hear in those last moments were Chirpy crashing against his bars in a useless attempt to free himself and the bad man’s raspy breathing against her cheek as he squeezed the life out of her. 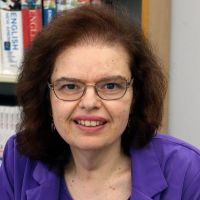 Debbie De Louise is an award-winning author and a reference librarian at a public library on Long Island. She is a member of International Thriller Writers, Sisters-in-Crime, the Long Island Authors Group, and the Cat Writer’s Association. She has a BA in English and an MLS in Library Science from Long Island University. Her novels include the three books of the Cobble Cove cozy mystery series published by Solstice Publishing: A Stone’s Throw, Between a Rock and a Hard Place, and Written in Stone. Debbie has also published a romantic comedy novella featuring a jewel heist caper, When Jack Trumps Ace, and has written articles and short stories for several anthologies of various genres. She lives on Long Island with her husband Anthony, daughter Holly, and Cat Stripey.