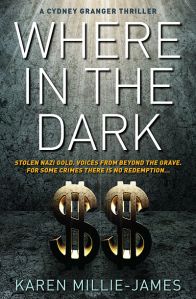 bonds each worth one million pounds. Corporate forensic

investigator, Cydney Granger, with help from beyond the grave,

enters a world previously unknown to her to unravel the truth

behind a web of secrets, lies, corruption, blackmail and hidden

Nazi loot as new horrors of the Third Reich come to light.

an escaped Nazi criminal, Adolf Weissmuller, living under the assumed

name of Albert Whiteman, whose son is about to run for the US

presidency. Can Albert ever make amends for his crimes against

humanity, or are some actions beyond forgiveness …?

Will Cydney, along with her trusted and tough protector, former

The consequences of Cydney’s investigations, stretching back

before WWII, are far reaching with the potential to bring down a

banking dynasty as she faces insurmountable odds from which

there is only one final solution.

The dramatic follow-up to The Shadows Behind Her Smile,

will stop at nothing to achieve their goals.

Albert Whiteman had led his life for the last fifty-eight years feeling confident he had left his past behind. Now, through his own fault, it was about to come back and bite him extremely hard and harm everything he had set in motion for his son to become president of the United States of America. How his fellow officers would have laughed to even think that the son of a Nazi officer, his own child, might one day hold that position.

He had not thought about his past until recently. It was almost as if it hadn’t happened, an episode in a book he’d read, as if he was so detached from his previous existence, repressing any memories and never haunted by images.  Now, he questioned whether in fact he should feel any guilt for his actions.  He’d never considered this or any consequences of the actual mass murders he had committed and the exterminations, but the thought alone and the questioning in his mind was eating away at him on a daily, almost hourly basis.  He couldn’t sleep, couldn’t eat, and was unable to function.  It was essential to his existence and to his life to have answers, especially now he didn’t have long left on this earth and would have to face his Maker.  He felt no remorse; how could he when everything he had done had been on the orders of his senior officers?

Never a religious man at all or God fearing, he had started to attend a catholic church in the last year, initially chosen purely because the architecture and the statue outside of the Madonna and Child attracted him more than any others.  The church dated back to the 1830s and was built in a pseudo-gothic style, and somehow it had managed to escape destruction in the civil war.  With its sweeping vista across the gorge of the Shenandoah River, it gave the man a sense of peace which he didn’t receive where he lived one hundred and fifty miles away, and he was struck by the richness of everything about it.

When Albert sauntered into the church it enraptured him, which came as a shock. The first time he had simply entered through the open door and stood inside the vestibule before going through into the nave where he gazed wonderingly around him, admiring the stained-glass windows and statues that honoured religious figures and illustrated the Bible’s words. Around the walls were plaques of the story of Christ’s crucifixion.  He felt drawn by the sense and smell of it all and the fullness of an all-consuming silence, and the cold, instead of repelling him, was somehow comforting. From childhood, religion to him was cold. The few times he was forced to attend church with his parents as a young boy, he’d found it unemotional and uncaring. He had never understood the draw or why you had to pray to God or anyone you couldn’t see or hear. Was the lack of heat to give you a sense of Hell in comparison? The preacher always drummed into him that was where everyone would end up if they didn’t abide by the rules set out in an ancient text. Now he may be thinking differently because that’s all he had left.