I attended a local Comic Con event called Eternal Con on Long Island yesterday with my family. It ran three days this past weekend, but I could only attend on Sunday. I expected the crowds to have died down a bit by then, but there were some diehards who had attended all three days. Even though my husband had purchased tickets in advance for himself, my daughter, and I, we decided to arrive early, and it was a good thing we did. Although we had to wait for it to open, we got a good start before the mobs entered.

It was our first time at such an event, and I had no idea what to expect. I knew it wasn’t my type of gathering, but my daughter and husband are both huge anime fans. I figured I’d accompany them but didn’t anticipate enjoying myself. 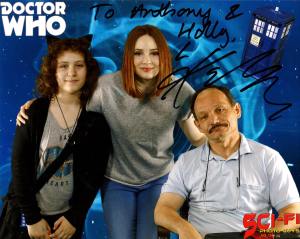 My husband had signed up for a photo op with Karen Gillian from Dr. Who. My daughter, who loves the show, didn’t want to be in the photo because, as a pre-teen, she now hates to have her picture taken. Her dad finally convinced her to be in it and, after waiting over 20 minutes on line even with a special photo op ticket that cost more than our entry to Eternal Con, the photo was taken in two minutes with no opportunity to talk to Karen. In addition, we later found out it would cost additional to have the photo signed and a digital copy made. My husband thought it was worth it, so he got both. I thought the photo came rather nice especially since my daughter had a rare smile on her face.

Since I wasn’t included in the Karen Gillian Photo Op, my husband felt bad and asked me to be in a photo with Brent Spiner, most well known as Data from Star Trek the Next Generation show but who also appeared in one of my favorite movies, “Independence Day.” The photo cost less, but it was taken with my husband’s Iphone against a wall instead of a photo background.

My daughter’s favorite moment besides spending time at the numerous vendors that were spread throughout the three floors of the Cradle of Aviation Museum in Garden City, was meeting voice actor, Vic Mignogna, who does the voice of one of her favorite anime characters, Tamaki Suou. Although she wouldn’t pose for a photo with him, he signed two photos for her that also featured two of his characters. We all attended his Q&A session later in the IMAX theater, and I even found his talk entertaining as well as a nice respite from the crowds that were growing by the minute around the vendor tables . I was especially interested in hearing about the “Star Trek Continues” series in which he stars as Captain Kirk. Mignogna said Star Trek was his favorite 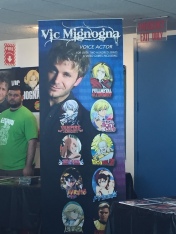 show growing up, and my husband and I could relate to that.

Another highlight for my daughter was discovering a group called the Society for Creative Anachronism located near some of the Cradle’s historical exhibits away from the maddening crowd. Since my daughter loves renaissance fairs and is learning about medieval times in school, she was especially interested in finding out what the SCA offers. We took some brochures and are checking out their upcoming New York events online. She also colored a treasure chest and created a catapult there.

After we had all purchased more items from the vendors — I found a Catwoman t-shirt and some cat jewelry — we headed home much poorer but richer in our experience of comic cons. I have to admit I had a pretty fun time if only watching all the crazy dressed-up cosplayers. Some of the displays also brought back childhood memories. I guess that’s why comic cons are so popular. They bring out the kid in all of us.