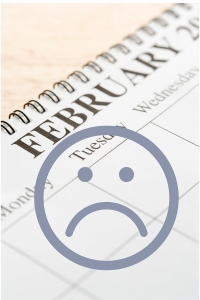 February is the shortest month of the year, and I’m thankful for that. When it has an extra day for Leap Year as it does this year, I am not happy to have those 24 “additional” hours. Why? Because February is my least favorite month. I don’t favor February for several reasons.

Arriving on the heels of January, it’s usually the time that most people abandon any resolutions they made in the New Year and, for those who live in the colder climates, it’s the time winter officially hits with at least one big snowstorm. Maybe those aren’t particularly great reasons for disliking a month, but consider this fact. While February brings love and Valentine to sweethearts, how many people are single and unattached, divorced, widowed, alone? For those people, February can be a cruel and lonely month indeed.

Also, have you noticed that there’s an increase in deaths in winter, most notably in February? Just this year we lost some popular people (this info previously posted by Geoff Herbert | gherbert@syracuse.com):

Personally, I lost both my father and mother-in-law in February. If you counter this by saying that several presidents were born in February and that many of your friends and relatives were, as well, I’ll say my mom was also born this month and celebrated her 88th birthday just a few weeks ago. I’m thankful for that, but I still don’t give February any more points because it’s a fact more births occur in the summer. Although the statistics in this article aren’t current, it’s likely they haven’t changed much: http://www.livescience.com/32728-baby-month-is-almost-here-.html

What else do I have against February? It’s a peak time for the flu and other viruses to spread. Check out the graph in this info from the CDC: http://www.cdc.gov/flu/about/season/flu-season.htm

February is also not a pretty month. Although daylight is beginning to last longer and there are occasional spring-like days, the trees are still bare and sometimes the snow that fell in January is still around and turning an ugly black.

I guess I’ll make it through one more February day this year, but I’m ready to move on to March. What about you? Is February also your least favorite month or do you have another? I’d love to hear your comments.