It may still feel like winter some days, but spring isn’t far away. It’s great to offer some fresh new reads to my followers. Just in time for Easter, my new Cobble Cove cozy mystery story, “KittyKai’s Easter Mystery” is now available.

During an Easter egg hunt at the Cobble Inn, a ring is found on the grounds by Alicia’s daughter, Carol. When the sheriff has it examined, he discovers it belonged to him and Gilly’s neighbor, Gretchen Miller, who disappeared the month before. An investigation leads to the discovery of Mrs. Miller’s body buried on the site of the inn’s new construction.

As Alicia and Gilly set out to solve this new mystery despite their husbands’ discouragement, Sneaky and Kittykai, the library and inn cats, secretly lend them a paw.

KittyKai’s Easter Mystery will be on blog tour with Great Escapes Virtual Book Tours from March 22 to 28.

March 23 – Escape With Dollycas Into A Good Book – AUTHOR INTERVIEW

I’m also proud to announce the publication of The Roaring ’20s: A Decade of Stories in which my short story, “Growing Up in the Summer of 1971” appears. I received a wonderful certificate for being included in this collection of timeless tales with 10 other authors. 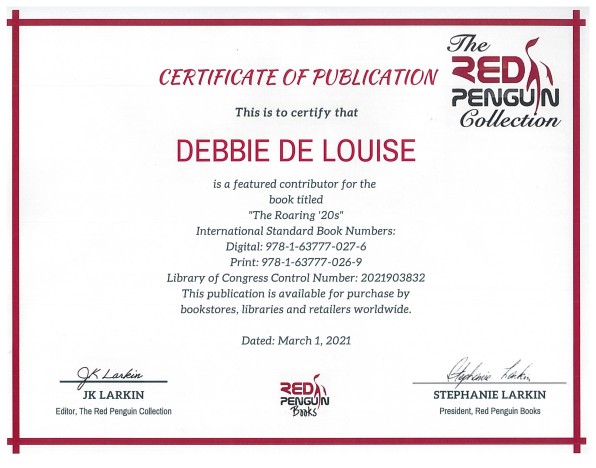 Are You Looking For a Collection that Roars as Loudly as the Exciting Greatest Decade?

Journey through the last hundred or so years of history as “The Roaring ‘20s”, an anthology for the greatest decade and all that have come and gone since, takes you from flappers and speakeasies to hippies and beaded doorways. With the next “twenties” still more ahead of us than behind, we could all use a little escape back to the glistening, dangerous, and thrilling world that once was.

Do you have unpublished stories hidden away in your files or on your PC? Poems, Essays, or other material? If so, you should check out the Red Penguin Collection, a series of anthologies with a variety of themes. Novice to advanced writers are invited to submit. The collection currently consists of 9 books including their new release, Stand Out, the Best of the Red Penguin Collection Vol. 1. On their website, there are also calls for 8 upcoming anthologies ranging from Feeding the Flock (a book of recipes); A Heart Full of Love (romance stories); The Florist on the Corner (nature-inspired poetry) and more. You can check the Red Penguin site for details and submission dates. I’ve been honored to have had my science fiction stories, “The Felindae Mission” included in both What Lies Beyond and the Stand Out anthologies. I’ve also had my poem, “Advent” included in the ‘Tis the Season anthology, and my essay, “Toasting 2021” included in We Made it!, their New Year’s anthology. 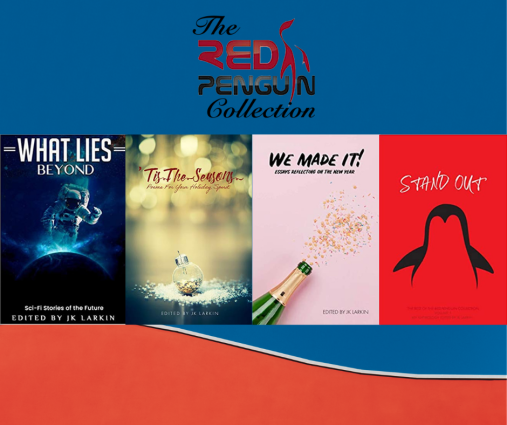 These anthologies are edited by J.K. Larkin, a Long Island based writer and recent graduate of Marymount Manhattan College. They are one of the many opportunities for authors that Red Penguin offers. Besides the anthologies, Red Penguin also publishes books using a traditional or hybrid model. Stephanie Larkin, the Founder of Red Penguin, has worked with many writers’ groups, including the New York Chapter of the National Writers Union, and The Long Island Authors Group, on book development and marketing. She’s taught in the Marketing Department at Nassau Community College for the past 10 years, where she enjoys working with future entrepreneurs and marketing professionals. She also works with several colleges in the business and entrepreneurial divisions, including the New York Institute of Technology and the Yale University National Student Leadership program.  Stephanie has been the moderator and host for dozens of author and writing events at libraries, schools and bookstores, as well as scores of online events. She hosts the Between the Covers TV show, The Once and Future Authors Podcast, and the Author Corner Cable TV show. I’ve been a guest on Between the Covers and The Once and Future Authors.

I’m thankful that I was included in the Red Penguin Collection and have appeared on their shows. I hope other authors will consider these opportunities and submit their work to Red Penguin.

I encourage you to leave comments. I'll reply to all questions in a timely manner, and errors in the posts will be acknowledged in the comment area. Feel free to disagree with my points if there is need for disagreement, but keep in mind that all off-topic comments, disparaging comments, comments with more than one link, and comments that include profanity will be deleted. You can contact me directly at debbiewriter@yahoo.com. Thank you for reading my blog.
Loading Comments...
Comment
×
<span>%d</span> bloggers like this: