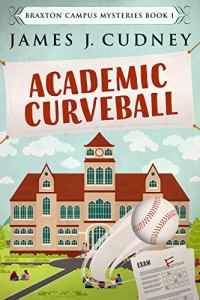 Academic Curveball is the second book I’ve read by James J. Cudney and the first of his Braxton Campus cozy mysteries. Having enjoyed his first novel, the standalone family saga Watching Glass Shatter that I reviewed here, I was curious to see how he would handle a cozy mystery. I wasn’t disappointed. The characters in Academic Curveball were all well portrayed. I especially liked Kellan, the main character, a widower with a young daughter who was called home for his father’s retirement party as president of Braxton College. Upon his return, Kellan who is currently working for Dark Realities, a television reality crime show, plans to meet Professor Abby Monroe who has material for the second season of his show after his father’s party. Unfortunately, he never gets to do so because Abby’s dead body is found during the party by his father’s assistant Lorraine Candito.

A number of people, some close to Kellan including his own father, are suspects in Abby’s murder, but the murder weapon is missing along with two other items, one that was intended as a gift to Kellan. The motive is believed to have involved the changing of a grade for an athlete so he can compete in a game that a college scout will attend. But when another murder occurs and they find the possible weapon hidden in Kellan’s father’s desk, Kellan has even more reason to solve the case despite the warnings by the town’s female sheriff who refers to him as “Little Arywick.”

Aided by his sassy grandmother, Nana D. and his old school friend Connor who is dating both his sister Eleanor and his college girlfriend Maggie, Kellan sets out to find the person responsible for the murders. Although I had a funny feeling about the character who the killer ended up being, I didn’t know the identity of the murderer until it was unveiled . . .  and then it all made sense. What surprised me even more was the cliffhanger at the end of the book that was totally unexpected. I won’t reveal any spoilers, but I love double twists. This one was done exceptionally well. I can’t wait to read the second book where it should be explained. My only criticism of this book was that the plethora of characters were introduced close together which made it somewhat difficult to keep them all straight initially. Otherwise, I highly recommend this series to those who like academic settings, a variety of interesting characters including a male protagonist, and cozy mysteries with lots of subplots and twists.

In addition to being a talented writer, Cudney also has a terrific WordPress blog called This is My Truth Now.