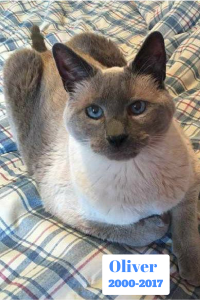 In memory of my sweet Oliver, who passed away two years ago on November 4, 2017 from a bout with Chronic Kidney disease, I’m offering my story, The Path to Rainbow Bridge, free from November 3 to November 5. I hope it gives some solace to others who have lost a beloved pet.

Old Tom the tabby was at the Gate. Next to him stood Shadow, a black shorthair who had been summoned while sun bathing on the Bridge. Shadow knew the reason Tom wanted to speak with him. It could mean only one thing. Another resident was arriving.

“Sorry to disturb you,” Old Tom said. “But I’ve had orders from above that another one of Kate Stewart’s cats will be joining us. This time, it’s Sam, her Siamese. He’s had a long life and much happiness with her, but it’s his time. Please alert Kate’s other cats about the new arrival.”

Shadow nodded his dark head. “I will be on it right away, sir. When is the welcome party scheduled?”

“Looks like tomorrow morning around 6 a.m. Remember, it takes time for the soul to reach us.”

“Who will be in charge of the party?” Shadow knew that, according to Bridge rules, the last cat admitted from a human’s family was the next in line to welcome the incoming resident. A year ago, when a car hit Shadow after he stupidly ran out the door when his human Ben came home from a doctor’s appointment, there had been no other cats in Ben’s family on the Bridge or at least none that Ben had forged the forever bond with, so Old Tom had welcomed Shadow. Now it was Shadow’s job to notify the last member of each incoming cat’s family until another first-timer was admitted.

Old Tom checked the register he held in his paws. Tom had been supervisor of the cat’s side of RB since he arrived 20 years ago because he was one of the unbonded, those pets who had either been ferals, strays, or housecats who had never developed the forever bond, that special connection of heart and soul that united animal and human eternally. In Tom’s case, he had been a stray in the alleys of New York City, living a surprisingly long life of ten years for an outdoor cat.

“Kate’s Floppy was admitted a few years ago,” Tom said. “I think he’s now residing on the north cloud over the rainbow. He’s a gray and white tuxedo fellow. Kate lost him from diabetic complications. It was one of our sadder cases. She administered insulin shots to him for many years and was at his side at the vet’s when the lethal injection was given. She’d had him since he was a kitten, and he misses her dearly but is glad that she found another cat to love while he waits for her on the Bridge.”

Shadow felt a tear wet his cheek fur. He was always choked up when he heard these touching tales. “Thanks, Tom. I will find Floppy and let him know. Although this is the first party he will host, he’s attended enough to know the procedure.” Floppy had already been on the Bridge for eight years, although up there they didn’t keep track of human time.