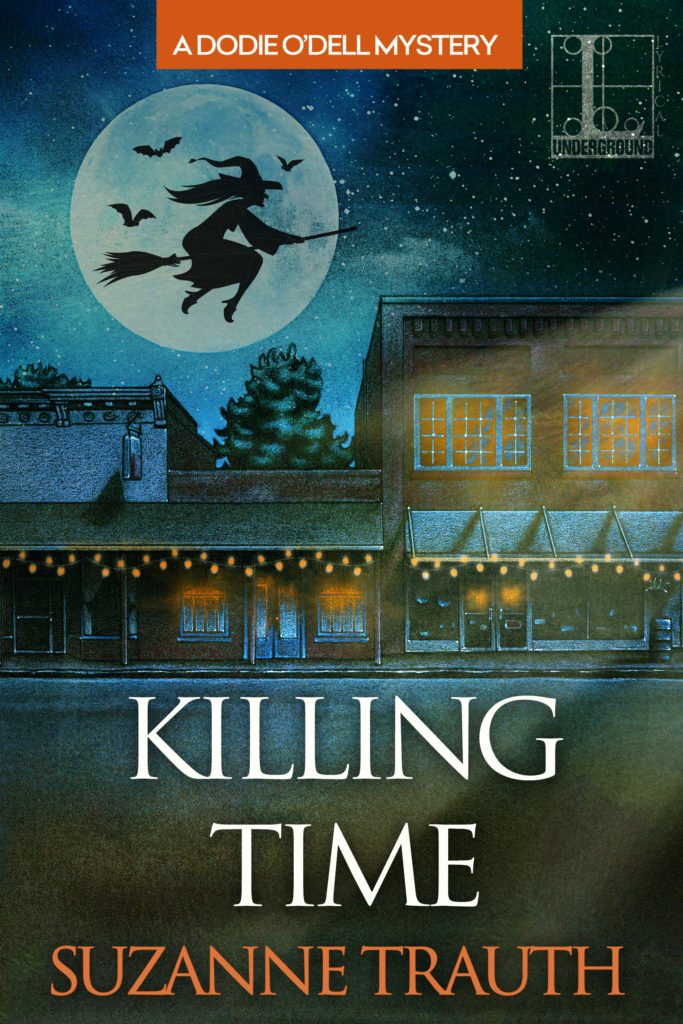 With Halloween just around the corner, Dodie O’Dell is making preparations to transform the Windjammer Restaurant on the Jersey Shore into a haunted house, while the Etonville Little Theatre is staging Dracula. But casting the titular Transylvanian is proving challenging. The amateur actors in the company are not shy about chewing the scenery, but who among them can convincingly sink their fangs into a victim’s neck? When a mysterious newcomer with a transfixing Eastern European accent lands the part, rumors that he might be an actual vampire start to take flight—not unlike the bat who’s recently been spotted in the town park.

But everyone’s blood really runs cold when a stranger is found in the cemetery with a real stake in his heart. Dodie decides to put her Halloween theme menu on the back burner and stick her neck out to bring the killer into the light of day. She’d better keep her wits about her, though—or Dodie may be the next one to go down for the Count . . .

“It sure looks haunted,” Edna murmured to no one in particular, to the cast of Dracula in general. They were grouped around her on the sidewalk that ran past the old Hanratty place that Carlos and Bella had rented. I’d never been inside though once I’d driven by it when I first moved to Etonville on my way out of town. The house stood on half an acre of scruffy lawn with patches of dried dirt, surrounded by a few straggly trees—minus leaves at this time of the year—and no neighbors. The nearest houses were on a side street some distance away. The three-story building looked as if it might collapse at any moment, its outer walls covered with weathered, gray shakes, the steps to the front door supported by concrete building blocks. There was no handrail. Light leaked out of windows on the first floor. Curtains covering small, circular panes on the third story—an attic room?—quivered. Was someone up there watching us? I shivered. A turret rose upward from the right side of the structure, giving the house a smidge of outdated dignity. A drain pipe dangled loosely from the gutter.

“Let’s go.” Penny corralled actors and nudged everyone forward to the front door. There were six company members, Renfield saying he’d be along later, plus Penny, Lola, Pauli, and me. Strength in numbers.

We crept across the porch cautiously, aware of the creaking beneath us as the flooring shifted with each individual’s footsteps. Penny put out a hand to knock on the door. Before she could hit knuckles to wood, it flew open. “Welcome everyone!” Bella stood in the doorway, a silhouette backlit by muted foyer lighting.

Behind her Carlos stood silently, observing the group huddled in his entryway, like deer caught in headlights.

Lola took the lead, moving graciously into the house. “Thank you. So nice of you to invite us to your home.”

I’m not sure what the members of the Etonville Little Theatre were expecting. Given the exterior and location of the Hanratty homestead, I anticipated something out of a late-night classic horror film. 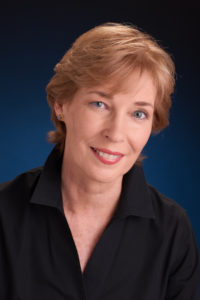 Suzanne Trauth is a novelist, playwright, screenwriter, and a former theatre professor at a university. She is a member of Mystery Writers of America, Sisters in Crime, the Dramatists Guild, and League of Professional Theatre Women. When she is not writing, Suzanne coaches actors and serves as a celebrant performing wedding ceremonies. She lives in Woodland Park, New Jersey.

May 22 – View from the Birdhouse – REVIEW

May 22 – The Pulp and Mystery Shelf – AUTHOR INTERVIEW

May 30 – Gimme The Scoop Reviews – REVIEW

This post was contributed by author Suzanne Trauth. Her cozy mystery, Just in Time, is currently on tour with Escape with Dollycas into a Good Book.

JUST IN TIME by Suzanne Trauth
From the beginning of my Dodie O’Dell mystery series, I knew that I wanted to create a cast of quirky, fun characters who would be included in each book. A cozy mystery series with both murder and humor, the latter generated by the mainstays of  Etonville, New Jersey. They include Dodie O’Dell, my protagonist, manager of the Windjammer restaurant and amateur sleuth—but don’t tell her she’s an amateur! Her investigative instincts are usually right on the money, much to the chagrin of her current squeeze Bill Thompson, Etonville’s police chief, who appreciates Dodie’s nose for detection but is wary when she gets in over her head. There’s her boss Henry, chef/owner of the restaurant, who is finally getting on board with Dodie’s theme food ideas that accompany the Etonville Little Theatre productions. Italian night for Romeo and Juliet, a seafood buffet for Dames At Sea…

Lola Trotter, theater diva and Dodie’s BFF, is always present to support Dodie’s adventures and accept a little hand-holding whenever the ELT is in production, or whenever she has to deal with Walter Zeitzman, ELT director, actor and sometime playwright, and his sidekick stage manager Penny Ossining. Who never met a cliché she didn’t love to mangle.

Of course Etonville wouldn’t be a small town without a gossip center—in this case Snippets Salon owned by Dodie’s other BFF Carol whose son Pauli is Dodie’s teenage computer guru. He’s always available to supply Dodie with digital forensic assistance in the form of email hacking, facial recognition software, deep Internet searches…you get the picture. And to round out the cast of locals there’s sweet Mildred, choir director, and husband Vernon, in a perennial prickly mood; the Banger sisters, elderly siblings who stay on top of Etonville rumors while dipping their toes in the acting waters of the ELT; and Edna, the law enforcement dispatcher for the Etonville PD who loves her police codes!

These regulars are the source of much of the humor in the mystery series as they navigate daily life in Etonville, generate gossip, busy themselves with Dodie’s love life, support the Etonville Little Theatre, and offer advice and perspectives on the murder-solving process. You gotta love them!

But what about the non-regulars? In every book I add characters who may or may not show up in future books…a few of them have been killed off. Sorry about that. In my upcoming book JUST IN TIME, there are a handful of interesting folks who make their debut in Etonville. The ELT is doing its first co-production with the Creston Players from the town next door. Dale Undershot, their leading man who becomes Lola’s heartthrob, makes a bow in Bye, Bye, Birdie, along with high school student Janice who claims Pauli’s heart—young love! There are also a few staff members, like the musical director and the rehearsal accompanist, who add a little levity to the story. Finally, Windjammer owner Henry has hired a new sous chef to replace his second in command: Wilson, fresh from the culinary institute. Happy, enthusiastic, eager to make his mark in the gastronomic world. He loves to experiment with Caribbean recipes from his hometown.

So every Dodie O’Dell mystery is a stew of the tried and true, regular, fun characters seasoned with some special folks who are passing through Etonville on their way to—wait I can’t tell you that. It will ruin the mystery…you’ll have to read JUST IN TIME to find out where they are headed.

Just in Time (A Dodie O’Dell Mystery)
by Suzanne Trauth 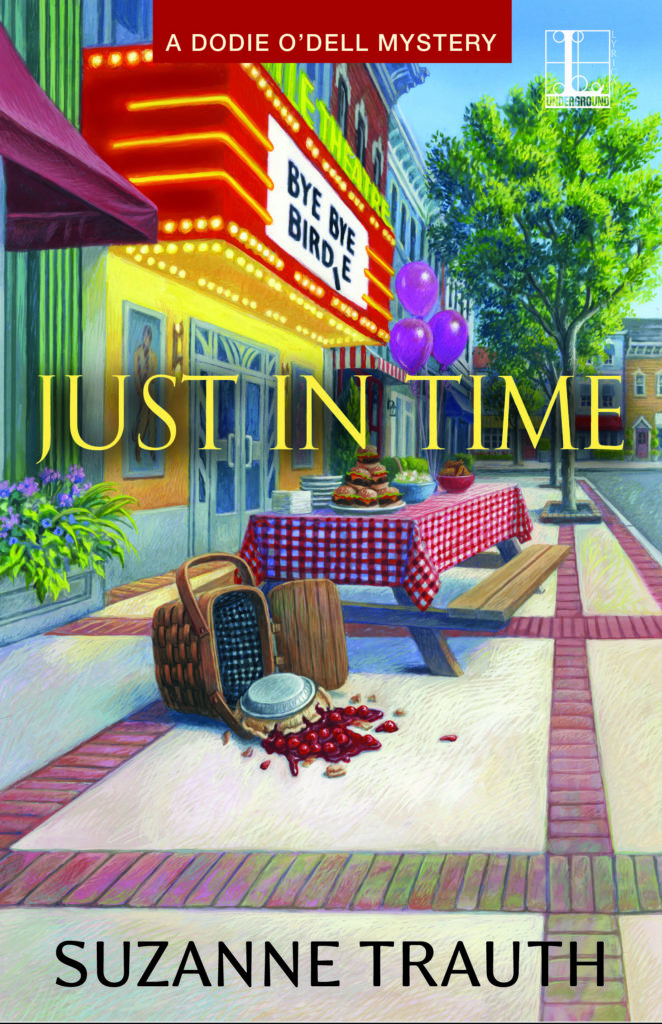 Business is humming at Dodie O’Dell’s Windjammer Restaurant, where she offers theme menus connected to the Etonville Little Theatre’s amateur productions. This June, the theatre is collaborating with the neighboring Creston Players to stage Bye Bye Birdie under the stars—their first musical! There’s a contest in the play to pick a fan to receive rock idol Conrad Birdie’s last kiss before he ships off for the Army, so Dodie plans a contest to pick the food for a pre-show picnic.

But before the show opens, Ruby, the rehearsal accompanist, is found dead in her car. Why would anyone murder the crusty old gal who loved to sneak a smoke and a nip between wisecracks? Once again, the resourceful restaurant manager must play the part of amateur sleuth, accompanied by Police Chief Bill Thompson, who also happens to be her beau. Confronted with a chorus of suspects, she’ll need to stay composed to catch the killer—or it’ll be bye bye Dodie…

Suzanne Trauth is a novelist, playwright, screenwriter, and a former university theatre professor. She is a member of Mystery Writers of America, Sisters in Crime, and the Dramatists Guild. When she is not writing, Suzanne coaches actors and serves as a celebrant performing wedding ceremonies. She lives in Woodland Park, New Jersey. Readers can visit her website at www.suzannetrauth.com.

September 14 – The Book’s the Thing – REVIEW

September 18 – Cozy Up With Kathy – REVIEW