Mother’s Day has always been a special holiday for me even before I became a mother because my birthday lands on it about every seven years. My husband’s birthday, two days later, is the same way. I guess we were both special Mother’s Day gifts to our mothers when we were born. I arrived the day after Mother’s Day on Monday, the 9th of May. I recall my mother saying I just missed being in the newspaper as a Mother’s Day baby. My older brother tells me there was snow on the ground that day, although most of the birthdays I remember were rainy. This year my day is predicted to be nice after a week of rain. 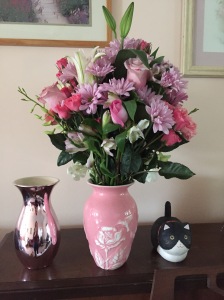 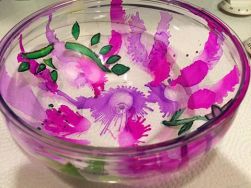 My daughter painted me a pretty bowl for Mother’s Day, and my husband bought me an Apple Watch that is also part of my birthday present. He made waffles for breakfast and cooked dinner. I also received a beautiful vase of flowers from both of them. I visited with my mother and brought her some candy and a basket of flowers in her favorite purple color from all of us.

I am blessed to have had two mothers in my life and also to be a mother when there was a time I never believed that would happen. My mother-in-law, Carol, to whom I dedicated my book, A Stone’s Throw, passed away from Cancer two years ago. She was a wonderful lady, and I considered her my second mother. I still miss her greatly. I remember how much she helped me after my daughter was born and was always there for me. Like my own mother, she was only 17 when she married and did not have an easy life, but she raised five kids and had many grandchildren and a few great grandchildren when she passed away too young at 71. My mother just turned 88. She’s in a nursing home but doing well so far despite being confined to a wheelchair and suffering from dementia.

My daughter came along when I had despaired of ever becoming a mother. My husband and I waited a long time before we decided to have children because we married late but were still establishing our careers and paying off college loans. By the time it seemed right to start a family, some obstacles stood in our way. I became pregnant a few times but miscarried each baby. The first one required a D & C because the heart beat had stopped after nearly 8 weeks, but my body wouldn’t let the fetus go. Neither could my heart. In my sorrow, I found the strength to try again. After another miscarriage, this one earlier and not as traumatic, I questioned if I should keep pursuing my dream of motherhood.

Each Mother’s Day that passed was painful when I saw other mothers with their children. Then, miraculously, I became pregnant again. I was so afraid something would go wrong. When I started bleeding just two months into the pregnancy, I thought for sure I’d lose the child again. My doctor assured me it was normal and that all was well. Seven months later, my water broke unexpectedly one morning the week before Halloween. I panicked fearing that it was too soon when my baby wasn’t expected until early December. Luckily, my daughter was born healthy at almost 5 pounds. She had to stay in the hospital for ten days, but we were assured she was fine. She’s nearly a teenager now and taller than I am. 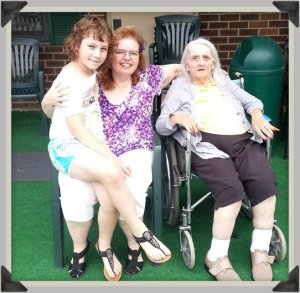 While I’m thankful for my Mother’s Day gifts, I’m more thankful for the love and memories, for the time I can share with my mother and my daughter. That’s what I celebrate most on Mother’s Day and all year long.