Welcome to the Canoples Investigations Exposes Space Dodger release tour. This is the third novel and fourth story in this series. Strap on your restraints and be ready for an exciting ride… oh, once you have the book in hand, you will discover there’s a special added attraction—the first chapter of Secret Society: A Canoples Investigations Novella! 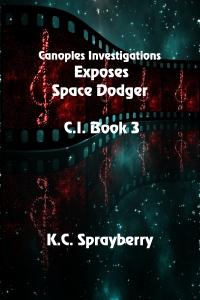 There’s a carnival on the station, with all kinds of “legally” cloned animals, more than a few zero-G acrobats, and miniature clowns. BD’s ever present suspicious mind latches onto one thing when the advance team for Galactic Carnival arrives to begin preparations for a weeklong visit. The ringmaster looks familiar, but the man swears that he has never been to Canoples Station before. Even worse, children five and under are disappearing. A bit of investigating on BD’s part clues him in to the fact this has happened on every station Galactic Carnival has visited so far. He’s determined to uncover the true identity of the ringmaster and solve the mystery of the missing children, but at what cost. Is BD willing to lose his lifelong friends to solve this case? Will they prove Jenna Rock, Wade’s girlfriend, isn’t involved?

Born and raised in Southern California’s Los Angeles basin, K.C. Sprayberry spent years traveling the United States and Europe while in the Air Force before settling in northwest Georgia. A new empty nester with her husband of more than twenty years, she spends her days figuring out new ways to torment her characters and coming up with innovative tales from the South and beyond.

She’s a multi-genre author who comes up with ideas from the strangest sources. Those who know her best will tell you that nothing is safe or sacred when she is observing real life. In fact, she considers any situation she witnesses as fair game when plotting a new story. 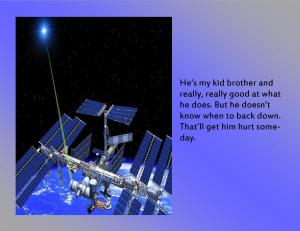 It feels so good to have Mildred close. I can’t think of her as Jenna, even when she has on her trademark wig and is wearing stage makeup like she is now. Granted, she’s the premier space grunge/rap artist in the whole galaxy. Everywhere she goes, people want to touch and possess her, but here on Canoples Station, I do my best to give her the room she needs to wind down.

That is, until I got a message late last night from her. I still can’t believe what she’s done. That my girl, who has absolutely no investigative training, has stumbled onto and taken control of a situation that is potentially explosive and might endanger her life without consulting Security on any of the stations where she’s performed until now just boggles my mind.

“You know.” She giggles. “I dream about moments like this.”

Her comment startles me. Here we are, stuck near the space dock with so many people around that it’s hard to keep an eye on everyone, and she says that. Sometimes, I think Mildred is a lot like BD.

“What do you mean?” I take my gaze off the crowd to look at her.

Interview with the Author

What do you do to relax and recharge your batteries?

I read. Of course, I read. I’m an author and reading is vital to what we do, but I also have certain books that draw me back. Action/adventure, science fiction, and fantasy top the list. Also, real life crime books are very intriguing. I’ll also cook—as in I take over the kitchen and without a recipe of really anything more than some ingredients, create new dishes. The most recent one was a pasta salad that was nothing more than tossing the pasta with leftover ham, whatever veggies were in the fridge, and then adding a great natural balsamic/olive oil vinaigrette. Everyone loved that. Or my tacos in pasta shells, which was created one night when I forgot to pick up taco shells. That’s an often requested family favorite. My biggest relax and recharge my batteries is to grab my camera and go out into the country, just taking pictures of whatever I find interesting.

What truly motivates you in general? In your writing?

The story motivates me. I have to hear the characters and be able to visualize the scenes in order to write my books. Often times, I am writing with my eyes closed, thinking about the whole scene as it’s unwinding in my head, and getting down the small details that make the book important.

Where do your ideas come from?

For the Canoples Investigations series, the story began on the afternoon of September 11, 2001. Writing that day had become impossible, just like many people found they couldn’t function after the devastating news struck. My youngest was about two months away from his sixth birthday and once we got home from kindergarten, he asked me why bad people want to hurt so many other people all at one time. This child needed to understand why his nice safe world didn’t feel that any longer. All I could tell him is that was a time when we looked for heroes, for people who stand up against injustice and put the world right again. He sadly said that it was too bad there weren’t any kids around who could do that. That moment was when the characters of BD, Carl, Cassie, and Terry began to fight their way to the surface. It would take another ten years before I could write their tales, but once I started, they have never let me release them for long.

What is your most marked characteristic?

I am devoted to my job, my duty. Nothing stands in the way of ensuring the residents of Canoples Station safe from whatever threatens us. But I don’t rush madly into a situation. I go by the rules, always. That goes back to when my dad, Tom Bradford, disappeared. He is the former Chief of Security. Everyone thought he’d been attacked and killed, but I knew better. Only I couldn’t tell anyone what was only suspected at the time, not even my younger brother. To make matters worse between us, I was thrust into the position of his father, a job he didn’t want me to have and one I took on reluctantly. That has caused more than a few problems between us.

When and where were you the happiest?

I’m happiest when Mildred is around. She’s the love of my life. Most people know of her as Jenna Rock, the space grunge/rap singer, but they don’t realize that’s only a persona she adopts to hide her true feelings. Mildred is a wonderful, loving, caring woman, even though her parents abandoned her on Mistlich when she was little more than a toddler. That she survived and became a galaxy wide success is a miracle.

What is it that you most dislike?

People who break the rules. We have rules for a reason. They are there for the citizens of the space stations to have an orderly, normal life. Lawbreakers, those who think the rules are for others and not themselves, always upset the balance. This is why I take my job as a Security officer so seriously. Our lives would be madness unless people like me are there to ensure order.