I’m proud to announce the release of my new Cobble Cove cozy mystery story, “Sneaky’s Summer Mystery” available on Amazon for only $1.99 and free on Kindle Unlimited. 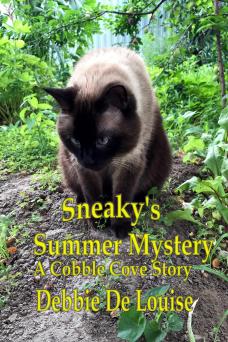 Cobble Cove is in the midst of an August heatwave. It’s the worst time for the air conditioner at the Cobble Cove library to break down. Alicia has no choice but to close the library and bring Sneaky, the library cat, home with her. After scheduling the air conditioner service with Rudy Gibbs, a technician from Hapnabber’s Repair Shop, she is surprised to learn that John knew Rudy when they were teenagers. When Rudy turns up dead after working on the AC at the library and Alicia learns of it during a barbecue she and John host with Gilly and Ramsay, Sneaky and Kittykai must once again protect their favorite ladies when they conduct their own investigation into the murder. 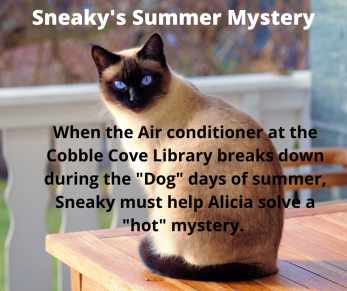 In this scene, after Sheriff Ramsay is notified at a barbecue that Rudy Gibbs, the repairman hired to fix the air conditioner at the Cobble Cove Library is missing, Sneaky and Kittykai follow him and Alicia to the library where the man was last seen.

Sneaky swallowed a few leftovers that Alicia had tossed him and then said, “Did you hear that, Kit? There’s a missing repairman. We might be able to work on another mystery together.”

Kittykai’s green eyes widened. “That’ll be fun. Shall we follow them?”

Sneaky, who’d lived his whole life inside, unlike Kittykai who Gilly found on a beach in Hawaii during her honeymoon, had only ventured out alone once before when he was investigating alone, and someone left the library window open. “How do you propose we do that, Kit? Alicia is very careful when opening the door.”

Sneaky bounded after the calico toward the front door. The sheriff was holding it open for Alicia. Just as he walked through, Kittykai slipped by. She looked back at Sneaky briefly to make sure he was behind her. Outside, they hid in the bush as Alicia got in the sheriff’s car.

“Phew!” Sneaky exclaimed, “You sure are quick, Kittykai.”

“There’s one problem. How do we get to the library? We can’t very well “tail” them,” Kittykai said watching Alicia drive off with the sheriff.

“That won’t be necessary. I know the way to the library and if I get confused, I still have my sniffer to assist.” Sneaky enjoyed showing off for his girlfriend.

Debbie De Louise is an award-winning author and a reference librarian at a public library on Long Island. She is a member of Sisters-in-Crime, International Thriller Writers, the Long Island Authors Group, and the Cat Writers’ Association. She has a BA in English and an MLS in Library Science from Long Island University. Her novels include the four books of the Cobble Cove cozy mystery series: A Stone’s Throw, Between a Rock and a Hard Place, Written in Stone, and Love on the Rocks. Debbie has also written a romantic comedy novella, When Jack Trumps Ace, a paranormal romance, Cloudy Rainbow, and the standalone mysteries Reason to Die and Sea Scope. Her latest book, Memory Makers, is a medical thriller. She lives on Long Island with her husband, Anthony; daughter, Holly; and three cats, Stripey, Harry, and Hermione.

If you didn’t catch my TV appearance on Between the Covers, you can view it here: