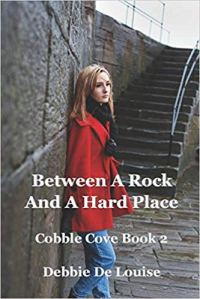 If you had the chance to read A Stone’s Throw, the first book of my Cobble Cove cozy mystery series, you came to know widowed librarian, Alicia, and followed her through the mystery that brought her to Cobble Cove and her meeting with John, the town’s newspaper publisher. In Between a Rock and a Hard Place, that takes place near the holidays in Cobble Cove, Alicia is faced with several new mysteries and one that is particularly close to home. This story can be read as a standalone or part of the 4-book series. 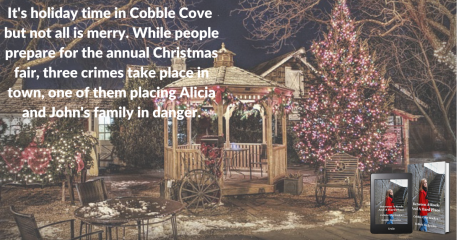 Check out the book trailer for this book:

Another death has occurred in Cobble Cove near the holidays. This time, it’s the owner of the new pet store in town who was felled by a case of cat food that crushed his skull. Was it an accident, or murder? While the townspeople including the sheriff are divided in their opinions, Sneaky and Kittykai, the library and inn cats, sniff out the truth. 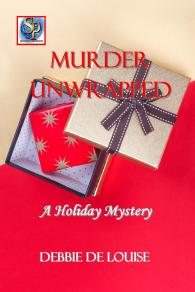 Richard Bright is a man with a plan. He’s an inventor who wants to kill his wife with one of his inventions. He hopes to put his plan into effect on Christmas, but his invention isn’t quite perfected. Dealing with his wife isn’t an option, nor her two rambunctious kittens, Harry and Hermione. What sweetens the pot is her large inheritance and a pretty young woman who is now working at his shop. Will Richard’s plan to have his special gift ready in time pan out, or will it fizzle with some of his other unfinished projects?

Thank you all for reading this post and my books and stories. Have a wonderful Thanksgiving!

I'm a librarian at a public library and author of the Cobble Cove cozy mystery series and other novels, short stories, poems, articles, and a novella. My books include CLOUDY RAINBOW, REASON TO DIE, SEA SCOPE, MEMORY MAKERS, TIME'S RELATIVE, MEOW AND PURRS, and the 6 books of my Cobble Cove cozy mystery series: A STONE'S THROW, BETWEEN A ROCK AND A HARD PLACE, WRITTEN IN STONE, LOVE ON THE ROCKS, NO GRAVESTONE UNTURNED, and SNEAKY'S SUPERNATURAL MYSTERY AND OTHER COBBLE COVE STORIES. I've also written a romantic comedy novella, WHEN JACK TRUMPS ACE, and short stories of various genres published as eBooks by Solstice Publishing and in anthologies published by the Red Penguin Collection. My standalone psychological thriller, SEA SCOPE, my medical mystery, MEMORY MAKERS, and my time-travel novel, TIME'S RELATIVE are published by NEXT CHAPTER PUBLISHING who has also published my cat poetry book, MEOWS AND PURRS, and the first book of my new Buttercup Bend cozy mystery series, THE CASE OF THE CAT CRAZY LADY. I've also signed with Next Chapter for a reprint of PET POSTS: THE CAT CHATS, my non-fiction cat book that will be retitled MEMORIES AND MEOWS. I am a member of Sisters-in-Crime, Long Island Authors Group, International Thriller Writers, and the Cat Writers' Association. I live on Long Island with my husband, daughter, and 3 cats. View All Posts

One thought on “Free eBook, One Day Only, November 29, and a Sneak Peek of Two New Holiday Stories”