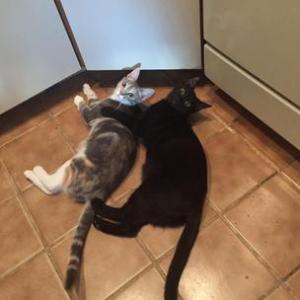 Since today, September 26, is Remember Me Thursday, I thought I’d share the story of my one-year-old cats, Harry and Hermione, who we adopted last October when they were three-month-old kittens. My 14-year-old daughter had never had a kitten. We had an older cat who passed away when she was four. Then we adopted our present cat, Stripey. He was almost a year old and full-grown. He didn’t hit it off well with Holly because she was a typical noisy toddler. When Oliver came along, the senior cat I took in after my mother could no longer care for him, Holly began to bond with him, but he attached himself to me. My husband promised Holly that she could have her own cat when Oliver passed away. Five years later, that happened. It was a heartbreak for all of us. We didn’t rush to get another cat, and Stripey seemed content to be an only cat again.

As the one-year mark approached that Oliver took his trip to Rainbow Bridge, a cat cafe opened up on Long Island called The Shabby Tabby Cat Cafe. I thought it would be fun to visit and see the cats. We took a trip there, and Holly fell in love with a kitten named Ringo. Unfortunately, someone else had already laid claim to him. Holly was upset, but her dad assured her that we would get a cat for her eventually, and I explained that Ringo was just not the one meant for her. 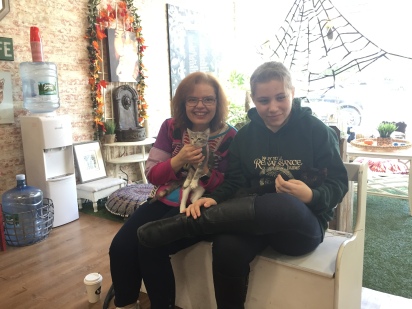 We took another trip to the cat cafe on October 21, three days before my daughter’s 14th birthday. There was a fall fair going on in town that day, and I thought we’d just drop into Shabby Tabby and see if they had any new cats. It turned out that they had several new kittens. My daughter spotted a black one right away and began playing with him. Although Ringo had been white and orange, she’d always said she wanted a black cat, but the main thing was one that connected with her.

All the cats at the cafe are named. I found out they come from the Golden Paws Society rescue in Huntington. After playing with Harry for a while, Holly told me she was in love with him. I could see why. He was a playful fellow who seemed affectionate and bright. When I asked if he was available, I was told he was but that he couldn’t be separated from his sister, Hermione, a calico kitten. I knew my husband wouldn’t like the idea of our taking two kittens when we already had another cat, but when I laid eye on Hermione, I was sold. It was like fate because I’d always wanted a calico cat after having so many other types of cats all my life. I also thought it would be great for the two kittens to be together as playmates. Eventually, I could introduce our older cat to them.

I completed the adoption forms that had to be approved by Golden Paws and set a pickup date for that Wednesday night, October 24, which was the best day for us because I had the next two days off to watch the kittens while Holly was in school. It also happened to be her birthday. My husband wasn’t thrilled when we broke the news, but he finally agreed. To prepare for the new arrivals, I picked up some supplies including a similar pet playpen in which the kittens could stay when we weren’t around. We set it up in my daughter’s room because we wanted her to learn the responsibility of caring for her cats. She was able to fit a food and water bowl inside, a few safe toys, and a litter box. She also cleaned her room and made it cat friendly. 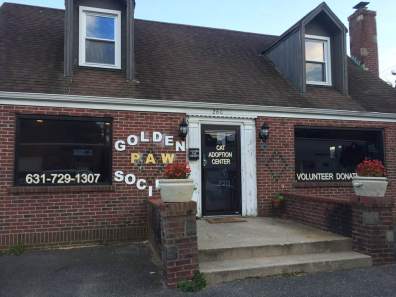 On October 24, we picked the kittens up from Golden Paws. When we got them home, they seemed to do fine in Holly’s room. They were accustomed to the playpen from the cat cafe, although my daughter kept them out after school while she was doing her homework. At night, Harry curled up and slept on her chest. We learned Hermione, despite being tinier and lighter than Harry, was a big jumper, so we had to be careful to keep the room closed when we entered and left. Stripey peeked in the “nursery,” and eyed the kittens. When they were old enough to be introduced to him, there was some hissing all around, but eventually they became accustomed to one another. 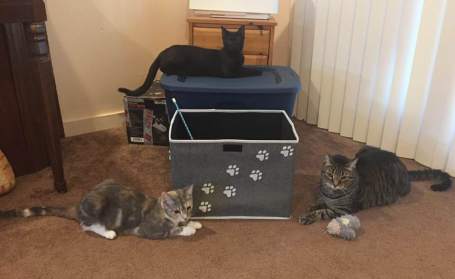 To help other pets find their forever homes and maybe win a prize for yourself and a rescue or shelter, visit the Remember Me Thursday website (https://remembermethursday.org/contest/) and share your rescue pet’s photo and story.