I’m proud to announce the pre-sale of my standalone, psychological mystery, Sea Scope, is now available.

Sarah Collins needs an escape. Mourning her brother’s death and the impending breakup of her marriage, she accepts an invitation to return to her childhood home in South Carolina, where her family operated an inn.

She hasn’t been back to Sea Scope for twenty years; not since she and her brother Glen discovered a body by the nearby lighthouse. She never understood why her parents left Sea Scope so suddenly, or the reasons behind her father’s suicide.

After Sarah returns to the inn, she faces long-buried memories, text messages and strange clues. Something is not right in Sea Scope.

Reunited with people from her past, she tries to figure out what’s going on in her childhood home. As the past and present collide, she must face truths about her family, and what happened that summer day by the lighthouse. But will she survive to tell the tale?

Debbie De Louise is an award-winning author and a reference librarian at a public library on Long Island. She is a member of International Thriller Writers, Sisters-in-Crime, the Long Island Authors Group, and the Cat Writer’s Association. She has a BA in English and an MLS in Library Science from Long Island University. Her novels include the four books of the Cobble Cove cozy mystery series published by Solstice Publishing: A Stone’s Throw, Between a Rock and a Hard Place, Written in Stone,  and Love on the Rocks. Debbie has also published a romantic comedy novella featuring a jewel heist caper, When Jack Trumps Ace, a paranormal romance, Cloudy Rainbow, and has written articles and short stories for several anthologies of various genres. She lives on Long Island with her husband Anthony, daughter Holly, and three cats.

I’m proud to announce that I’ve signed a contract with Creativia Publishing for my psychological thriller, Sea Scope. 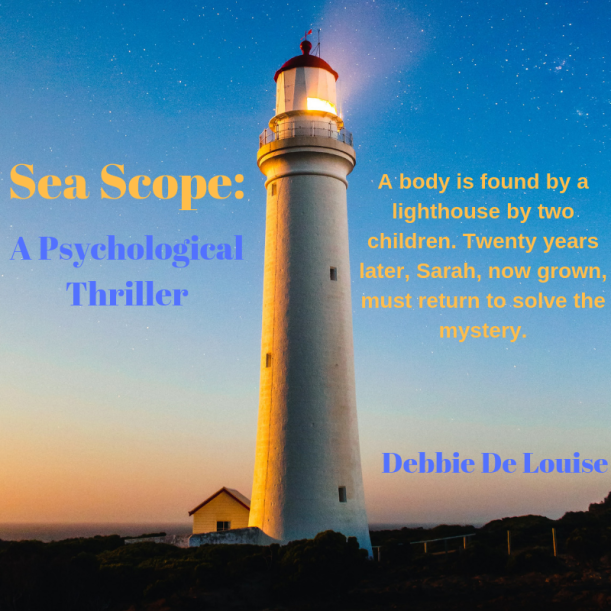 When infertility threatens her marriage and her husband refuses to seek medical help, children’s book illustrator Sarah needs an escape. Sea Scope, the family-owned inn in South Carolina where she spent her childhood, seems just the place. It’s been twenty years since she’s set foot there, twenty years since she and her brother Glen discovered the body of a guest. Although ruled a suicide, Sarah always had her suspicions. Now she faces long-buried memories and ominous text messages from someone claiming to be her dead brother.

A devout skeptic and seeker of facts, Sarah hunts the prankster, uncovering inconvenient truths and family secrets along the way, until that long ago “suicide” looks more like murder. And if Sarah keeps digging, the next body found by the lighthouse may just be her own.

What’s unique about this book are the true facts about lighthouses and lighthouse keeping that are scattered throughout. Of course, what will come as no surprise to readers of my other books, this one also features a cat.

Keep your eyes on this blog and subscribe to my newsletter for further details about this book and the release date.