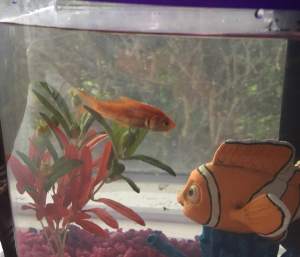 My daughter attended a high school homecoming this past weekend while I was at the local author fair at the Port Jefferson Public Library. As I was setting up my table, I received a call from her on my cell that she’d won a fish in a contest and didn’t know what to do with it. We’d had fish when she was young after my cat died and we hadn’t yet replaced him. We hadn’t had any luck with those fish, as most of them died within a week. The longest-living one was doing well until we introduced another fish to the tank to keep him company. I remember how upset she was when I told her that her fish “Rocket” had died. She’d named him after the children’s show Little Einsteins.

When I got home from the fair, Holly was watching the goldfish swim in a small tank she got at the carnival where she’d transferred him from his bag. We knew he needed a larger tank and one that filtered the water. I recalled having found our old tank recently and putting it in the garage. The next day, Holly moved the fish to a bowl with fresh water where he swam around quickly. While I was out, she went in the garage got our old tank, cleaned everything, and set it up. When I came home, she told me she was missing the filter, so we ran out to a pet store and spoke with a fish specialist who gave us the proper one. In addition, we purchased additional fish flakes and a couple of other items to help prepare the water. The store owner gave us instructions, and she followed them. When the fish, she named Kirishima for an anime character got into the new tank, he seemed to adjust and enjoyed the bigger space.

I posted to Facebook about our getting him and asking if anyone also kept fish with cats since we have Stripey.  A few responded that they did and had no problems.

When I went to work at the library yesterday, I picked up a book on goldfish for further information. When I came home, Kirishima was swimming around and exploring the aquarium. I put on some music to do my exercising, and he seemed to “dance” with me. I took a video of him which, unfortunately, turned out to be his last one.

When I didn’t see Kirishima this morning, I was worried. He didn’t seem to be anywhere in the tank. When fish die, they usually float to the top, but he wasn’t up there. My daughter took the lid off the tank and finally found him in the filter. He floated to the bottom and lay there. We knew he was gone. I think Holly took it better than me. I’d begun to enjoy watching him swim. I realized that most carnival fish are sickly, so I shouldn’t have expected him to last long. Yet I blamed myself. Did I do something wrong? Did we feed him too much or too little? Did we rush him into the aquarium? Did we not give him enough light or darkness? All these questions will never be answered. I only know that I feel a loss. Maybe we’ll get another fish. Maybe we’ll just put away the aquarium again. It’s strange to mourn a fish we only had 3 days, but he was beginning to grow on us. It’s possible I took it harder than my daughter who seemed to accept it.

I try to tell myself it’s for the best. We have a cat, after all, but he didn’t seem to even notice the aquarium we put in our window. I tell myself it would’ve been one more thing to take care of in our busy lives and one more thing to worry about when we go away. Yet I can’t help the sadness I feel. We’ll send him on his way tonight to Rainbow Pond or wherever fish go. Rest in Peace, Kirishima. Perhaps I’ll find a place for you in my next book.

2 thoughts on “Ode to a Carnival Fish Named Kirishima”