I hope you all had a nice Easter, Passover, or whatever holiday you celebrate this time of year.  I hope it was as special for you as it was for me, although I rather doubt that. This Easter was truly magical to me in many senses of the word, and I’d like to tell you why.  Before I do, just a note that this is based on my own experience and feelings and is not an endorsement or criticism of any religion, church, or other place of worship.

A year ago, I had stopped attending church. Because my parents were of mixed faiths, I and my siblings hadn’t been raised in a particular religion, although my family always celebrated the Christian holidays. My mother had grown up in a Catholic household and taught me prayers that I recited each night, and I accompanied her to church the rare times she went. I often found the experience confusing and a bit boring. I attended a Catholic high school but felt out of place among those who had grown up practicing the religion. After college, I experienced a personal challenge that turned me toward the Church and enrolled in RCIA classes, was Baptized, and confirmed as a Catholic at the church where I was married a few years later. My husband, a Methodist who wasn’t much of a churchgoer, had no desire to convert to Catholicism. When I became pregnant with our daughter, we made a decision to join a Methodist church near our home. I found the pastor’s sermons uplifting. He even came to the hospital when the baby was born prematurely and Baptized her six months later. Unfortunately, he moved to another church shortly afterwards, and we found the new pastor didn’t inspire us in the same way and gradually gave up going to services.

When my daughter started Kindergarten, we enrolled her in a Catholic school and decided to raise her as a Catholic. Since she had been Baptized as a Methodist at the church my husband and I had joined, we needed to reaffirm our Baptisms at a service at our new church. My daughter and I went through this simple ceremony. I made an effort after that to attend church with her. Like most children, she wasn’t thrilled about spending her free time at mass especially since she attended some at school. As much as I wanted to, I didn’t find my own experience during these services of much value. I questioned my feelings and what I sought in a religion. I had trouble finding answers. When my daughter decided to enroll in public Middle School, I had to admit I was relieved. It wasn’t just that we would save money on private-school tuition, but it would no longer tie us to that particular church. However, we had hoped she would continue her religious studies and make her confirmation. She chose not to, and how could we argue that she felt Catholicism wasn’t for her when neither of us were very sure of our own religious beliefs? 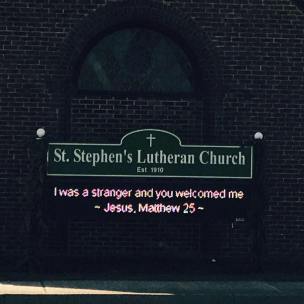 I think I may have drifted along after that like most people who attend church or synagogue or other places of worship mainly during holidays or when the mood strikes them. Yet, a series of events caused me to realize that I was missing something very important. It all started when I was invited by a patron at the library where I work to speak at her church book club about my mystery novel. She invited me into her home where I had a nice evening with several of the book club members. A few months later, I began to walk around the neighborhood and often passed the church of those friendly people who had welcomed me into their house that night. I knew it was a Lutheran Church and not a Catholic or Methodist one, but I wondered about it. That wonder grew. I spoke again to the woman who had initially invited me to the club, and I received an email from their pastor asking if there were any questions she could answer about the church and inviting me to attend a service as a visitor. I was surprised the pastor was a woman, and this further piqued my curiosity about the church. We emailed one another back and forth for some time, and I kept promising to visit “one day.” But it was difficult to make the move. I knew I was under no obligation. I knew it might turn out as it had at the other 3 churches I’d attended. I knew that staying home on Sundays, writing, or finding something else to do with my time on my day off was easier. And then . . . . my cat died. My beloved, sweet Oliver whom I’d only had 5 out of his 17 years. The day after I had to let him go, I needed somewhere to turn. A place to find some peace in my pain. I remembered St. Stephens and found my way there that sad November day. The book club members weren’t at the mass I attended, but several parishioners smiled and welcomed me. I met Pastor Emily for the first time and immediately felt comfortable in her presence. While the congregation was small, I looked around and saw people of different ages and sexes. Several introduced
themselves to me. There was a feeling there. One that made me keep coming back for more. Week after week.

As much as I enjoyed the masses at St. Stephens, I was still unsure when I was invited to attend Voyage meetings. Similar to RCIA, Voyage is a program to introduce new members into the church. The first few meetings were open to anyone who wanted to try them out. They included a hot lunch, salad, and dessert followed by a bible study conducted by Dottie, one of the ladies who I’d met from the book group, and Pastor Emily. While the questions posed during these meetings were challenging, they were an interesting introduction to themes of the Bible and how they relate to our own lives. When the time came for me to decide whether I was ready to make the commitment to continue as a Voyager, I knew in my heart that my answer would be, “yes.”

More pleasant surprises awaited me. I was teamed up with a coach, a church member named Vickie who proved to be a great support to me on my journey. More than that, she became a friend. I was also reintroduced to a childhood classmate and several library patrons who were members of St. Stephens. I learned that this small, tight-knit group was nonetheless open and welcoming to newcomers. It also offered a nice variety of social activities outside of church. I attended an advent wreath-making event with my daughter; a fun Chinese New Year; and a Karaoke night. After suggesting to Pastor Emily about organizing an Author Fair of local authors including myself, she was enthusiastic about the idea and directed me toward the Inreach/Outreach Ministry Director, who I’ve been working with to plan the May 12 event that will take place with 7 other local authors.

That leads me to this past, unforgettable Easter. Although I came down with a stomach bug on Tuesday, I was relieved when I was well enough to attend the first of the three special church services leading up to Easter. On Thursday evening, I participated in Maundy Thursday by washing the hands of another church member. On Good Friday, I conducted my first ever church reading and venerated the cross. Saturday night, however, was the ultimate experience as I and seven other Voyagers became members of St. Stephens. It started outside where we all lit candles and then entered into darkness. There was a slight wind that nearly extinguished my candle, but the flame reignited as soon as I stepped through the door. Ironically, this was like the twists and turns in my own spiritual life. There had been a point where I’d given up on the Church, but the flame had never entirely been doused. The music and prayers that night were memorable, but it was the joining of the community and the opening of their hearts to me and my fellow Voyagers that made everything so special. The spritz of water we all received after we recited our Affirmation of Baptisms was followed by applause, welcomes, and hugs. It was the best Easter ever because I’d found the best Church ever.

I'm a librarian at a public library and author of the Cobble Cove cozy mystery series and other novels, short stories, poems, articles, and a novella. My books include CLOUDY RAINBOW, REASON TO DIE, SEA SCOPE, MEMORY MAKERS, TIME'S RELATIVE, MEOW AND PURRS, and the 6 books of my Cobble Cove cozy mystery series: A STONE'S THROW, BETWEEN A ROCK AND A HARD PLACE, WRITTEN IN STONE, LOVE ON THE ROCKS, NO GRAVESTONE UNTURNED, and SNEAKY'S SUPERNATURAL MYSTERY AND OTHER COBBLE COVE STORIES. I've also written a romantic comedy novella, WHEN JACK TRUMPS ACE, and short stories of various genres published as eBooks by Solstice Publishing and in anthologies published by the Red Penguin Collection. My standalone psychological thriller, SEA SCOPE, my medical mystery, MEMORY MAKERS, and my time-travel novel, TIME'S RELATIVE are published by NEXT CHAPTER PUBLISHING who has also published my cat poetry book, MEOWS AND PURRS, and the first book of my new Buttercup Bend cozy mystery series, THE CASE OF THE CAT CRAZY LADY. I've also signed with Next Chapter for a reprint of PET POSTS: THE CAT CHATS, my non-fiction cat book that will be retitled MEMORIES AND MEOWS. I am a member of Sisters-in-Crime, Long Island Authors Group, International Thriller Writers, and the Cat Writers' Association. I live on Long Island with my husband, daughter, and 3 cats. View All Posts

2 thoughts on “My Best Easter Ever”